The Dirty Truth About Soil Health 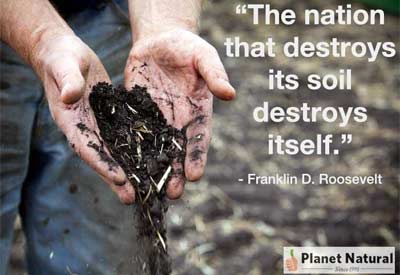 It’s a point we’ve made often: healthy soil is the key to organic gardening. Whether you’re growing vegetables, ornamentals, or a lush, durable lawn, the health of your soil is what makes it all possible.

Healthy soil is living soil, filled with billions of microbes and beneficial, microscopic fungi; nematodes, earthworms and other beneficial organisms. It’s alive. Frank Tozer, in The Organic Gardeners Handbook says that growing plants is the secondary activity of the organic grower. The first? Growing soil. Grow soil full of organic material from compost, full of living organisms, and the other necessary ingredients plants require, and growing gardens, without chemical fertilizers and the use of pesticides and herbicides to control problems,  becomes vastly easier.

Healthy soil, it turns out, may not be important to just the gardener but to the planet as well. It seems that soil health is the basis of the earth’s store of biodiversity. When we lose healthy soil, we lose everything.

That was the crux of author Jim Robbins’ piece this weekend in The New York Times. Robbins is a Helena, Montana based journalist whose latest book is The Man Who Planted Trees: Lost Groves, Champion Trees and An Urgent Plan To Save the Planet.  His piece, “The Hidden World of Soil Under Our Feet” elevates the issue of soil’s importance to a level that not only makes healthy soil critical to gardeners and farmers but to everyone. In short, the future of the planet rests in our soils.

“Soil is the foundation on which the house of terrestrial biodiversity is built. Without robust soil ecosystems, the world’s food web would be in trouble,” Robbins writes. He goes on to compare the soil under our feet to the oceans, saying that what goes on there is still largely a mystery. And he explains how we endanger our soil: through tillage agriculture, through the use of pesticides and herbicides that destroy the soil’s biodiversity, through acid rain, a problem that’s been largely controlled but has left a harmful legacy in our earth. Then there’s simply paving over, something that we’ve done at an alarming rate, a practice that literally suffocates the life out of the soil.

He also makes an interesting point about climate change, plants and their relation to soil. It’s often said that once we can no longer grow wheat in Kansas because of heat and drought, we’ll just move those crops northward. But growing wheat isn’t just dependent on climate conditions.  It’s dependent on soil conditions, too. The supportive, beneficial soil condition of Kansas may not exist further north.

At one point, Robbins also points out how soil health can help prevent disease in humans by holding down dust.

The upside of Robbins’ article is that scientists are starting to pay attention. Recently scientists have founded the Global Soil Biodiversity Initiative, a group formed to examine the importance of the very dirt we stand on. (Dirt seems such a derogatory term for something so critical.) Robbins quotes Diana H. Wall, the chairwoman of the Initiative, regarding what can be done. “Practice no-till agriculture for one, Dr. Wall said, which means not plowing every year and allowing dead vegetation to decompose. Backyard gardeners can do the same. Avoiding synthetic chemicals is also important. Adding compost, especially worm compost, can help by making soil ecosystems more robust.”

Adding compost. How many times have we said that making compost, that organic gardening might save the world? More and more, we’re beginning to believe it. Save the soil.

One Response to “The Dirty Truth About Soil Health”