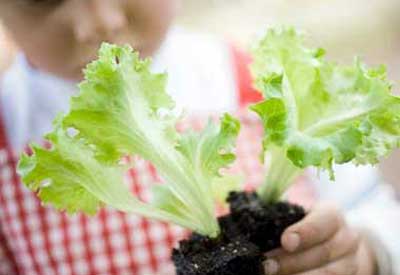 Organic gardeners know that a little dirt never hurt anyone. Of course, it’s a different story if the dirt your vegetables grow in contains herbicides and pesticides. Now Jeff D. Leach, in this op-ed piece in The New York Times argues that a little dirt is crucial to our well-being.

Leach is the director of the Paleo Biotics Lab in New Orleans. He’s something of an anthropologist of human biology. His take in this article and others is that our fear of food pathogens has led to a sanitized diet that no longer provides us the beneficial microbes that fought off the diseases borne by the contamination found in industrial agriculture. “Increasing evidence suggests that the alarming rise in allergic and autoimmune disorders during the past few decades is at least partly attributable to our lack of exposure to microorganisms that once covered our food and us,” Leach writes. He goes on to suggest that “reintroducing some of the organisms from the mud and water of our natural world would help avoid an overreaction of an otherwise healthy immune response that results in such chronic diseases as Type 1 diabetes, inflammatory bowel disease, multiple sclerosis and a host of allergic disorders.”

Of course, excessive cleaning of mass-produced vegetables, even those grown organically, is necessary to prevent outbreaks of foodborne illness. “While these improvements in hygiene and sanitation deserve applause, they have inadvertently given rise to a set of truly human-made diseases,” Leach writes. He suggests we need to consider all the reasons we might become sick from tainted foods and that we take more responsibility for what goes on in our own guts. He believes that “illness from foodborne pathogens is but a symptom of our minimally challenged and thus over-reactive immune system.” The way to avoid them? To eat more small-farm, direct-to-market produce.

Leach’s conclusion is that farmers markets are a link to the way humans used to be supplied with these immune-system boosting “old friends,” as he calls them. “As we move deeper into a “postmodern” era of squeaky-clean food and hand sanitizers at every turn, we should probably hug our local farmers’ markets a little tighter. They may represent our only connection with some “old friends” we cannot afford to ignore.” What he omits is the considerable number of families that are growing their own vegetables and fruits, often organically, thus supplying themselves not only with healthy nutrition but a natural supply of microorganisms that will sustain and train the immune system (one of Leach’s more interesting claims is that the immune system is capable of learning). We encourage you to read the entire story and the other links to fully understand what Leach is saying. But what it amounts to is another important argument, unexpected though it may be, that raising your own fruits and vegetables organically is essential to the well-being of you and those around you.