Bring branches into bloom with these tips for forcing flowering trees and shrubs. 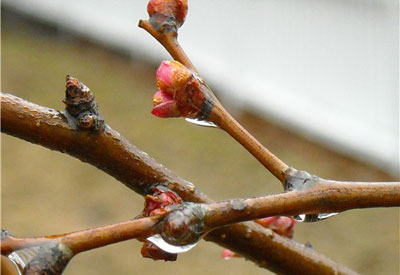 It’s hard waiting this time of year…for spring. Lots of us like to hurry the season by bringing in cut branches from pussy willow, flowering crab apple, and any other soon-to-blossom shrubs or fruit trees and “forcing” the trimmed branch to flower. Once it does, the branch — or several placed in a vase tall enough to hold them — brings us what we’re waiting for, the beautiful and often fragrant blossoms that have yet to appear out in the still- cold, early spring world.

There doesn’t seem to be any consensus on exactly how to do this. My grandmother used to bring in lilac twigs as soon as she saw signs of budding and just stick them in a jar with water. Her rule: the closer they are to blossoming outside, the better they’ll blossom inside.

But for those of us trying to get a jump on the season — albeit indoors — here’s some additional suggestions. Grandma was right about making sure there were signs of budding before bringing in any branch you hope to flower. Don’t be fooled: leaf buds will often appear a bit earlier than the buds that will break into blossoms. Learn to identify which are which (not a hard thing to do).

Choose straight, bud-filled branches and cut them as you would when pruning: at an angle. Do this on a warm day. Once indoors, keep them moist. Margaret Roach over at AWayToGarden.com (scroll down) recommends submerging the trimmed branches overnight and then keeping them in a bucket of water with plastic draped over them until you see the skin of the blossoms swell and separate. We’ve never tried the submersion technique but we do know that one’s rate of success is better if you first keep the branches in a cool damp place — say a basement — to help them transition from outdoor conditions to in. Once you see the first sign of flowering, it’s time to find a vase and a suitable place to place them like the center of your dining table or some other highly visible spot.

What to force? Any fruit tree branch will work. Cherries are particularly nice and can usually be done earlier than apple, pear or peach. Flowering quince is lovely, though it’s often hard to find straight branches. Azaleas and rhododendrons will work if you have them. We’ve also read that magnolia, service berry and forsythia do well forced though we’ve never tried them.

Our favorite is pussy willow, the other blossom, if you can call them that, which Grandma liked to force. They’re one of the earliest blossoms, easy to pick, and their furry little buds invite touching, especially from children. Maybe you have techniques and trees or bushes that you can add to our story. We’d love to hear them.