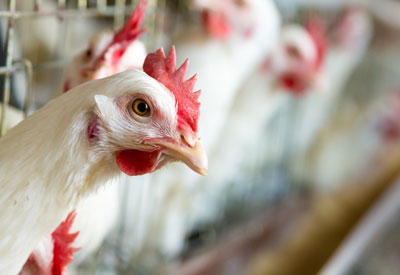 Foster Farms, one of the nation’s largest chicken producers, has announced that it has stopped the use of antibiotics “important to human medicine” in all of its chicken raising facilities. The move was part of a press release announcing two new lines of chicken products, Foster Farms Certified Organic and Foster Farms Simply Raised an antibiotic-free chicken.

The press release can be seen here.

The “important to human medicine” label, according to Jonathan Kaplan over at the Natural Resources Defense Council’s “Switchboard” blog are those classes of antibiotics that are used in both animal agriculture and in human medicine. The NRDC had strongly encouraged Foster Farms to make the move.

Foster Farms, the West Coast’s largest producer of chicken, follows Tyson and Perdue, the nation’s #1 and #4 poultry producers, in earlier announcements that they had ended the use of antibiotics on their chickens. The moves came after large poultry buyers McDonalds and Chick-fil-A said they would no longer purchase meat raised with antibiotics.

More immediately, Foster Farms’ announcement came after it was featured in a PBS Frontline examination of Salmonella outbreaks and contaminated chicken. The program documented Foster Farms culpability in the 2013 Salmonella Heidelberg outbreak that sickened 634 people in 29 states. Nearly 40% of those sickened were hospitalized.

Even after the outbreak was over, a Portland, Oregon television station found repeated sanitation violations at a Kelso, Washington, Foster Farms processing plant despite Foster Farms assurances that it had added additional precautions.

The Frontline report is one of the more frightening accounts of just how little meaningful inspection of our food supply is actually conducted. The report found that chickens were inspected whole but not after being cut up. 85% of chicken produced in the United states is cut up before its sold.

The report states that between 1998 and 2012, chicken and turkey have been associated with 278 salmonella outbreaks in at least 41 states.

We’re glad that Foster Farms will offer organic and antibiotic free chicken. But pardon us for feeling cynical about their safety record both past and going into the future. The cozy relationship between the meat industry and United States Department of Agriculture means that a lot of contaminated chicken, beef, and pork is slipping unnoticed into the consumer market.

The per cent of chicken sold in the United States containing Salmonella averages 24% according to Food Saftey News (see “repeated sanitation violations” link above).

Buying poultry products in the supermarket shouldn’t mean gambling with your health. Buying from small, local, organic producers is a start. But it’s always best to take matters into your own hands. Maybe that’s why so many people, many of them city dwellers, are doing this.