Learn easy tips for growing and cooking with celeriac (a.k.a. celery root). 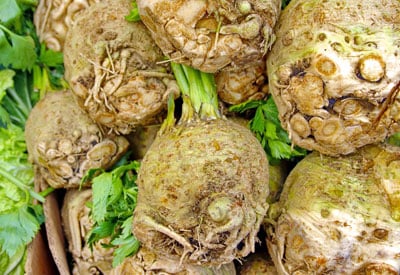 Most years, your friendly and curious Planet Natural Blogger likes to plant something in his garden that he hasn’t tried before. How well he remembers that first sowing of kohlrabi back some (garbled) years ago! Now it’s a family favorite.

We’re expecting the same thing to happen with celeriac, sometimes known as celery root. Why we haven’t tried growing this classic cool weather crop previously is a mystery. Garden vegetable books always sing its praises and the words that usually attract us — easy to grow with few pest problems — often accompany the catalog accounts of this Medusa’s head of the vegetable world. Yes, she may be ugly but what sweetness she holds inside!

Then we were thumbing through an advance copy of Joe Eck and Wayne Winterrowd’s upcoming book To Eat: A Country Life (it’s due to be published in June). Eck and Winterrowd, the authors of several gardening and country living books, are the master landscapers behind Vermont’s North Hill Garden. Winterrowd passed away in 2010 making To Eat the team’s last book. In it, they write knowingly and poetically about what they raised at North Hill, everything from apples to wild salad. (more on this book when it nears publication).

It was their chapter on celeriac that got us thinking about the ugly vegetable we’ve never grown. There’s a humorous account on how they’d take an old suitcase to a late-season farmers market and fill it with celery root to take home for winter storage (celeriac is one of the best winter keeper vegetables). The two men talk about how their mothers would save the celery hearts for them when making that old 50’s era canape: celery stalks with cream cheese. They note how the delicate, even sweet flavor of celery hearts is exactly that of good celeriac.

Celeriac is, as noted above, easy to grow. But it does have a few requirements; namely (and like celery) moist growing conditions. Here’s what we’ve found by searching and asking around. Start celeriac indoors a couple months before taking to the garden. Once germinated, give it a cool place to continue growing indoors.

It’s a long-season crop — up to 120 days — so get it in the ground as close as possible to the last frost. One caution: hardening off carefully is a must. If celeriac experiences several days of nighttime temperatures under 45 degrees, it will be fooled into thinking it’s completed its growing cycle. Use a cold frame or bring plants inside at night. It’s best to time your planting so that you’ll be harvesting celeriac late in the season when temperatures are cool. This brings out its best flavor. If you live in one of the warmer zones — say seven — plant later in the summer for winter harvest.

That’s it. Dig them out of the ground carefully and shake all the dirt you can from them before wrapping in newspaper and putting in the root cellar (or the bottom of your refrigerator). We’ve worked with market-raised celeriac and it can be a lot of trouble to clean. Don’t cut off the tangle of roots or break the skin if you’re planning to store them. When you’re ready to use them in the kitchen, pull off any roots that will come by hand then go at it with a knife. Don’t be afraid to cut off enough of the skin, warts and all, to reveal the creamy flesh underneath; a little waste will save a lot of work and frustration.

There’s a lot of ways to prepare celeriac. Use it like you would any root vegetable, in soups, slice thin and fried or roasted. It’s good creamed (all though Eck and Winterrowd say they don’t care for it, or anything else, that way… too much like baby food) with a little butter and nutmeg (or maple syrup) or with olive oil and chives. One of our favorite dishes at a now forgotten restaurant was a salad of grated celeriac that had been soaking in rice vinegar, tossed with some chopped red pepper and walnuts. We’ve also seen raw celeriac served with a homemade mayonnaise. But the most tantalizing description comes from Eck and Winterrowds’ book. It’s an oyster stew made with chicken broth and heavy cream, sporting potatoes, parsley and celeriac. Though spring is still a couple weeks away a dish like this has us thinking of November.