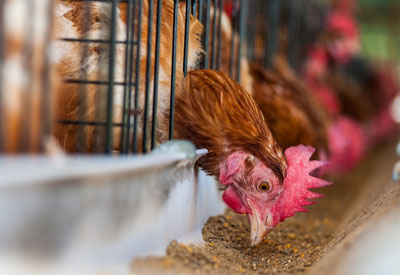 A recent expose of the United States Department of Agriculture’s Meat Animal Research Center has focused attention on animal cruelty in factory farms and big agriculture. The crowding and debeaking of chickens, the confinement of sows when giving birth, the feedlot conditions of cattle; all these issues (and more) have drawn attention to the livestock industry and its pursuit of extracting profit from animals. But this article raises a whole new set of concerns.

The Research Center explains its work in fairly general terms:

Scientists at the Roman L. Hruska U.S. Meat Animal Research Center (MARC) are developing scientific information and new technology to solve high priority problems for the U.S. beef, sheep, and swine industries. Objectives are to increase efficiency of production while maintaining a lean, high quality product; therefore, the research ultimately benefits the consumer as well as the production and agri-business sectors of animal agriculture.

But the specific studies and practices as described in the article, some that have been conducted for decades, are troubling. Some involve cruel and apparently pointless surgeries. The experiments designed to increase birth rates often have unintended consequences:

Pigs are having many more piglets — up to 14, instead of the usual eight — but hundreds of those newborns, too frail or crowded to move, are being crushed each year when their mothers roll over. Cows, which normally bear one calf at a time, have been retooled to have twins and triplets, which often emerge weakened or deformed, dying in such numbers that even meat producers have been repulsed.

Especially troubling are the results that have come of developing an “easy-care” sheep, one that doesn’t require shelter or shepherding. The lambs of these sheep are often abandoned and freeze or starve to death. Many of the newborns at the research facility are killed by coyotes. These lambs never even make it to slaughter.

The most horrific story is that of a young cow, fixed in position by a kind of cage, and left with six bulls whose libidos were being studied.

In a time when more consumers are looking for meat from animals that have been raised humanely, the Research Center’s work seems particularly misguided. Food safety is a growing issue and even meat producers are beginning to realize the value of raising their animals humanely.

The issue of raising animals humanely for slaughter seems to carry a built-in contradiction. But considering the conditions on factory farms, animals who live without confinement, force feeding, or heavy doses of antibiotics arguably have better, less painful lives.

This was always a concern among the small farm and hippie homesteaders we lived among back in the day. Even those of us who were vegetarians had goats or maybe chickens. We pampered them the best we could.

But the idea of letting them live out their lives and die a natural death seemed misplaced. Quick and humane butchering when the time came fit right into our waste-not philosophy. Some small livestock raisers we knew even claimed it added a measure of respect to the animal’s life. But sending off an old milker to prepare for barbecue was never an easy thing to do.

We’re reminded of corporate agriculture’s push to design genetically modified crops. The results the researchers pursue always have to do with profit and seldom with improving the product. And they often have disastrous results.

The Center’s fertilization and embryo experiments designed to increase the number of twin births among cattle often ended with both calves dying as their eight legs became tangled. Even single calves experienced difficult birth from mothers whose wombs had been so enlarged that calves had no traction for leaving. Some 95% of the female cattle born had birth defects. Farmers and ranchers began to complain that the promise of getting twice as much from each cow just wasn’t worth it.

These are touchy issues with many practical and ethical considerations. Go read the whole article and let us know what you think.