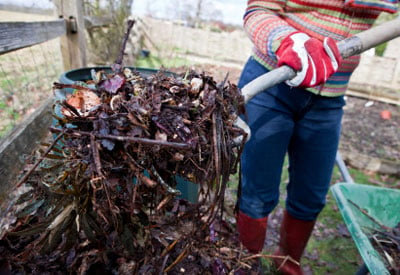 Compost is an essential element in organic gardening. Compost is made of decomposed organic matter that can be used to improve the health of garden soil. The compost adds humus, organic matter that cannot be broken down any further, to the soil. The humus aids in nutrient and moisture retention in the soil and also changes the density of the soil. Composting is not only beneficial for its soil-building properties; it also greatly decreases the amount of garbage that can end up in a landfill. The compost ingredients are naturally decomposed and reused instead of being thrown away. Compost can also help reduce the amount of toxins in soil due to pesticides or fuels. The compost can regenerate this soil and prevent the spread of the toxins to other plants and into water sources.

With the right equipment, turning garbage into garden gold is a cinch! At Planet Natural we supply everything you need: bins, tumblers and activators to get your pile cooking, plus compost turners to aerate your heap. Now, let’s rot!

Although composting has blossomed in popularity, the methods have been practiced as early as 23 AD in the Roman Empire run by Pliny the Elder. The Romans would collect all the remaining materials at the end of the growing season, pile them all together to decay, then use that compost when planting season arrived. Composting in the modern era began in the 1920s in Europe. The Europeans began using compost for organic gardening. Many methods of composting were spread throughout Europe, into India, and the United States. Some modern composting attempts to speed up the process so that the compost is created in only 2-3 weeks. The carbon-to-nitrogen ratios are strictly controlled as well as the moisture levels of the compost pile. Many scientists disagree that these strict controls will not speed up the composting process and say that modern processes in composting have not made great advances over traditional methods and will still take a few months to fully decompose.

A composting pile needs 4 main ingredients: air, water, living plant materials, and dead plant materials. The dead plant materials provides the carbon necessary for the composting process, and the live plant materials provides the nitrogen. Sources high in carbon are dried leaves, pine needles, newspaper, and sawdust. Good nitrogen sources include coffee grounds, glass clippings, food scraps, and horse manure. Meat and dairy products should not be added to the compost pile since they may attract animals. Disease garden plants should also be avoided. These can create diseased compost which can be spread back into the soil and contaminate future plants. Microorganisms which do the work in breaking down the ingredients into compost can be added to the pile in the form of soil, compost activators or worms. Watering each layer of the pile is also necessary to begin the compost process.

Compost is most commonly used as mulch in gardening. The compost protects the soil around flowers and plants and keeps weeds from growing by blocking out sunlight. As it rains, nutrients from the compost get washed into the soil to nourish the roots of the plants. When planting seeds, compost can also be mixed into the soil or used as an organic potting soil to help hold moisture and nutrients for the growing plant.

There are many different approaches to composting besides the traditional outdoor compost pile. Depending on the type of compost needed, different organisms and methods are used to create the appropriate compost. New approaches are always being tested. The following are a few popular approaches:

Vermicomposting uses worm bins and red worms in the process of composting. It has become popular for the composting of food waste and indoor home composting, because it has a higher rate of increase of the carbon-to-nitrogen ratio which allows the materials to decompose more quickly than without the addition of worms. The end product also has lower salinity levels which are more beneficial than traditional compost products when growing plants.

Compost tea is created by steeping compost for 3 days to a week. This method was discovered in Germany and is used to help treat plant fungal diseases with the bacteria in compost tea.

Composting for Facilities by the EPA

Composting for the Homeowner

A History of Composting

Composting: Good for the Garden and the Environment

The Role of Worms in Composting