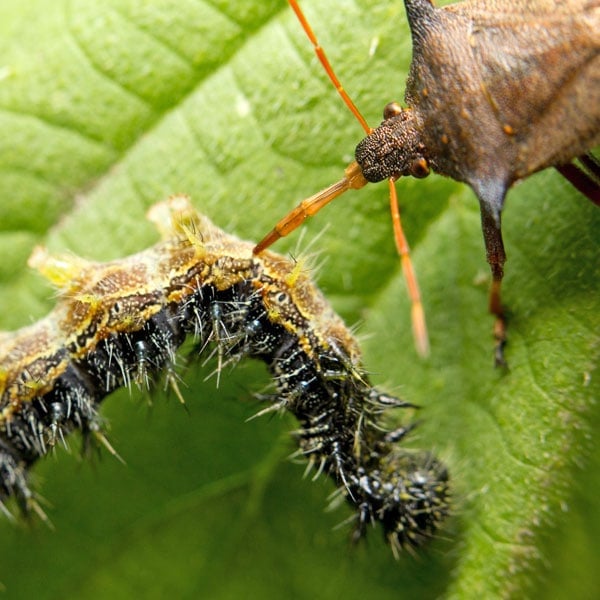 Highly mobile, soldier bugs suck out their victims’ juices by penetrating it with a large, weapon-like proboscis. 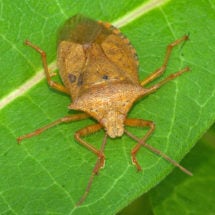 The spined soldier bug feeds by penetrating its prey with a harpoon-like proboscis.

A voracious predator, spined soldier bugs (Podisus maculiventris) prey on some of the most potentially-damaging grubs, caterpillars and soft-bodied insect pests including the European corn borer and corn earworm, Gypsy moth caterpillars, the cabbage looper and cabbage worm, flea beetles and Colorado potato beetles, fall armyworms and beet armyworms, the diamondback moth, the cotton boll worm and the Mexican bean beetle. Varying in color from brown to yellow and speckled with black spots, P. maculiventris is common throughout the United States.

Shop our large selection of biological controls, including spined soldier bugs, at Planet Natural. One vial — 250 eggs — treats up to 250 square feet and costs $159.95 with FedEx Overnight shipping included!

Highly mobile, adult soldier bugs will scurry or fly among plants to discover prey. They suck out their victims’ juices by penetrating it with its large, weapon-like proboscis. Adult female lay barrel-shaped egg clusters colored gray, cream or gold on stems and leaves, each cluster containing 20 to 30 eggs. Female will lay up to 1,000 eggs during their lifespan. Nymphs, which are predacious in four of their five stages, stay close to their egg clusters until they begin seeking prey of their own. Females can live five to eight weeks depending on conditions, males slightly longer. Because the spined soldier bug preys on nearly 100 different pests, it’s highly effective in both gardens and greenhouses.

Note: P. maculiventris adults are highly mobile, and will spread rapidly throughout the release area by walking and flying. 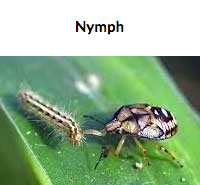 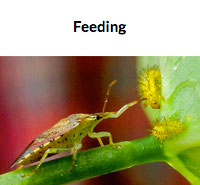 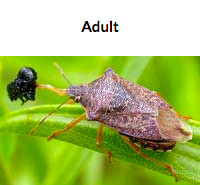