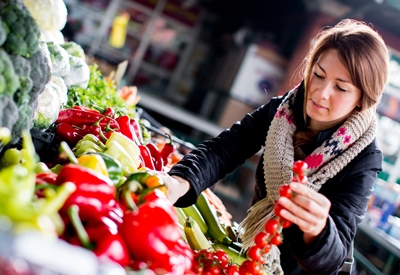 A guide for selecting pesticide-free produce.

The use of pesticides has become a standard practice in farming. They are used to repel damaging pests and prevent them from destroying whole crops. Unfortunately, pesticides can leave residue on fruits and vegetables that may eventually cause health problems in people who regularly consume them. Although some harmful chemicals are no longer used on food since the passing of the Food Quality Protection Act of 1996, there are still concerns surrounding the amount of pesticides that are currently being put to use. To alert consumers about the amounts of pesticides that are in their food, the Environmental Working Group (EWG) created two important lists. The first of these lists the foods that are considered the cleanest due to the low amounts of pesticides. The second lists foods that are the worst of the offenders and that have the highest levels of pesticides. These EWG lists are called the “Clean 15” and the “Dirty Dozen.”

The clean 15 is a list of fruits and vegetables that the EWG has found to have the least amount of pesticide residue based on tests conducted by the U.S. Department of Agriculture. This list may fluctuate yearly, but some types of produce appear regularly. Certain vegetables and fruits, like pineapple, for example, naturally have a protective layer that stands as a defense against pesticides. As of 2014, the EWG Clean 15 list includes avocados, pineapple, cabbage, sweet corn, sweet peas (frozen), asparagus, mangoes, onions, papayas, eggplant, kiwi, grapefruit, cauliflower, cantaloupe, and sweet potatoes. When eating these food items, the pesticide levels are so low or non-existent that purchasing organic may not always be necessary. With 99 percent of its samples clean of pesticide residue, avocados hold the honor of being the cleanest item tested. Although their percentage rate of samples with no residue wasn’t as high as the avocado, pineapples, mango, kiwi, and papayas were impressively clean, with between 89 percent to 80 percent of samples showing no pesticide residue traces.

According to the latest report by the EWG, 65 percent of the foods that are tested by the U.S. Department of Agriculture come up positive for residue from pesticides. The 12 produce items that the EWG has found to have the highest pesticide concentrations make up a list known as the dirty dozen. This list includes apples, strawberries, celery, spinach, grapes, peaches, imported nectarines, cherry tomatoes, sweet bell peppers, potatoes, cucumbers, and snap peas. The report notes that pesticide residue was found on 100 percent of the nectarines tested. Apples were a close competitor, with 99 percent of the samples testing positive. Despite their size, grapes are one of the largest pesticide offenders, as 15 different pesticides could be found on just one grape.

Guidelines for Fruits and Vegetables to Receive an Organic Stamp

Organic foods are items that have been grown free of synthetic pesticides and other chemicals. Because of the increased desire for healthy foods that are free of potentially dangerous chemicals, there has been a rise in the number of products that are labeled as organic in markets. Consumers must exercise caution, however, when purchasing these items, as food labels can be misleading. People can be confident that an item is organic when it has been certified by a certifying agent that is accredited by the USDA. This accreditation allows them to market their product as organic using the USDA organic seal. Produce that has not been certified cannot legally use an organic label from the USDA. Farmers and growers of raw products such as fruits and vegetables can become certified by applying to a USDA-accredited certifying agent. They must provide the agent with a description of their operation, what substances they’ve applied to the soil over a three-year period, and the products that they grow. In addition, they must also provide an Organic System Plan. This written plan must outline what their practices are, including any substances that are or will be used. The certification is received after the certification agent has reviewed the information and conducted an on-site inspection to verify that the practices meet organic standards. The organic standards, or requirements, for crops involve not using or allowing the use of not only synthetic fertilizers but also irradiation, genetically modified organisms, sewage sludge, and prohibited pesticides.