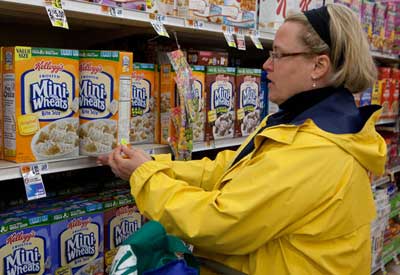 It’s no surprise that Monsanto, Dupont and others are pouring big money into California to fight the state’s GMO labeling referendum which will be on the ballot November 6. How they’re doing it — through surrogate organizations — is right out of the grand American political tradition of ironically-named organizations. Front groups help hide the players behind these organizations. And what could be more ironic than hiding the identities of the companies and individuals who are fighting a right-to-know initiative?

AlterNet, the independent news gathering service, estimates that several big front groups will spend $60 to $100 million fighting the initiative. One of the largest is The Coalition Against Costly Food Labeling. Their website lists such scary articles on topics including how GMO labeling will hurt the poor and limit your food choices. Who exactly is behind the CACFL? The names aren’t surprising. According to the article, it’s composed of the “Grocery Manufacturers Association (GMA), whose members also include Monsanto, BASF, Bayer, Dow and Syngenta, all producers of GMO seed and related products, as well as many large food processors and supermarket chains. Also on the list is the Council for Biotechnology Information (CBI), whose members include Monsanto, BASF, Bayer, Dow and Syngenta.” Their mission? To “protect” consumers from GMO labeling.

AlterNet reports that the groups are ready to unleash an advertising onslaught against the measure. They face an uphill battle. USA Today reported that a March poll found that 87% of adults questioned think genetically-modified foods should be labeled. But if you think passage is a slam dunk, remember this:

“A decade ago in Oregon, a similar measure that appeared to have the support of two-thirds of voters was rejected after a last-minute spending blitz by labeling opponents. With the financial backing of the organic industry, labeling supporters in California say they will be better prepared.”

It’s also worth remembering that similar measures were recently defeated in the Connecticut and Vermont legislatures after considerable pressure from food manufacturing interests. All of us interested in natural foods will be watching this one with interest.