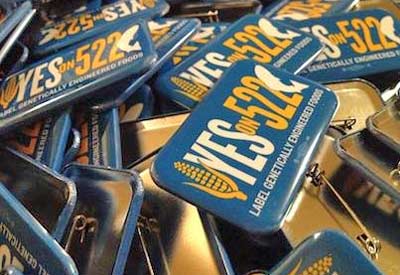 Your friendly Plant Natural blogger likes to remain cheerful! upbeat! and optimistic! Today? Not so much and with good reason. A recent public opinion poll in Washington State shows that support of the GMO Labeling Initiative that would require labeling of foods containing genetically-modified ingredients has changed a negative 41% since the big-money interest ads attacking the initiative were rolled out in September. The momentum connected to such a swing suggests that the initiative, still favored by plus 4% of the public, is in danger of being defeated. The initiative enjoyed a 45% lead just six weeks ago.

The amount of money allied against the initiative breaks a record in the state which has seen its share of expensive initiative battles. The Center for Media and Democracy reports that all of the money for No on 522 came from the Grocery Manufacturers Association and five chemical and biotechnology corporations: Monsanto, DuPont, Dow, Bayer, and BASF. The total is at least $17.1 million. Of that over $17 million, how much was given by individual contributions to fight the initiative? $550.

Complaints that the Grocery Manufacturers Association is a shell designed to protect the actual corporate interests funding the no on 522 campaign led to a lawsuit filed by the Washington State Attorney General. Within two days, the GMA (notice how it’s one letter different than GMO) released the list of who was actually supplying the money. PepsiCo, Nestle, and The Coca-Cola Company all donated over a million dollars. General Mills gave nearly $600,000. The long list of companies includes Campbell Soup Company, ConAgra, Hershey, Kellog’s, and Smuckers among many others.

Coming clean hasn’t ended the GMA’s troubles. Since the release, the Attorney General has asked for penalties to be leveled against the umbrella group. And Moms For Labeling, an organization supporting the initiative, has filed a class-action suit that would, among other things, require the GMA to reserve $7 million be held to pay various penalties it faces for breaking election funding rules.

Sadly, most of the money is being spent on deceptive advertising of the sort that was used to defeat the California labeling initiative. Even equivalence friendly news sources like The Seattle Times have pointed out the lies and misleading comparisons being used by the No forces.

This news comes at a critical time in the battle against genetically engineered crops. As PR Watch reports, the next generation of pesticides and herbicides to be used on GMO crops are even more dangerous than those now used. The USDA is currently considering allowing farmers to grow GE crops designed for use with herbicides that are known carcinogens and reproductive toxins. What harm might they cause? We may never know. Because of patent laws friendly to corporate agricultural interests, there’s no independent testing of genetically-engineered crops and the chemicals used on them.

Also, the likelihood that corn containing Bt toxins will become even more prevalent. (PR Watch (scroll down) has a good explanation of the differences between applied Bt uses and the kind in genetically modified crops: “when Bt is used by organic farmers, it is used only sporadically and breaks down quickly in the environment. In GE crops, every cell of the plant produces Bt all the time. In fact, a 2010 study found Bt in the blood of 93 percent of pregnant women and 80 percent of umbilical cord blood samples.”)

Our faith in democracy is threatened when special interest money can lie and deceive the public so easily. We have no answer to the question of why all the reasons GMOs should be resisted — including their threat to organic farming, let alone public health — aren’t getting out. The fact that the Yes forces are being outspent in a big way helps obscure their message. There’s much riding on the Initiative 522 campaign. The vote comes on November 5. Will truth triumph over greed and lies? Stay tuned.