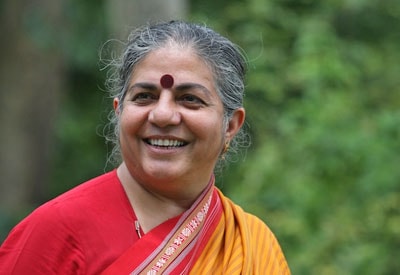 Every social and political movement has its hero. In the global anti-GMO movement it’s environmentalist Vandana Shiva, a woman who tirelessly attacks patent-protected seeds and corporate agriculture and champions returning the land and the future of seed to small, local farmers.

This stand and the following it’s garnered has, of course, made her one of the most feared anti-corporate activists on the planet. It’s also brought her a lot of controversy. There’s no doubt that she states her case in the strongest terms and occasionally plays loose with the facts. But her principles are solid and her conviction must be admired by friend and foe alike.

Shiva was born beneath the Himalayas to a father who was a forester and a school-administrator mother. She joined a group of women in the 1970s that prevented loggers from taking trees by grouping together to hug trees. She received her PhD at the University of Western Ontario and there’s much argument over what exactly it was in. Philosophy? Physics? The Philosophy of Physics (her doctorate was entitled “Hidden Variables and Non-locality in Quantum Theory”)?

It seems a bit desperate to attack this woman over the specificity of her PhD. Would we take her more seriously if it were in physics rather than philosophy?

In a long profile last August in The New Yorker, writer Michael Specter describes how Shiva’s life changed after she attended a conference on biotechnology and the future of food in the 1980s before GMO crops had been released. She told Specter:

“I realized they want to patent life, and life is not an invention…they want to release G.M.O.s without testing, and they want to impose this order worldwide. I decided on to flight back I didn’t want that world.”

The titles of Shiva’s books speak for themselves and define the activist’s direction: Soil Not Oil, Biopiracy: The Plunder of Nature and Knowledge, Monocultures of the Mind: Perspectives On Biodiversity and Biotechnology, Water Wars, Manifestos On the Future of Food & Seed. There are others.

The Violence of the Green Revolution explains Shiva’s belief that the Green Revolution of the 1960s — when India’s small-farm agricultural base was replaced by large scale, productivity and profit oriented farming — “destroyed India’s traditional way of life.” Shiva also connects the high rate of suicide among India’s farmers to the introduction of GMO seed. Specter counters with a study that concluded that if India hadn’t applied Green Revolution techniques (which means lots of nitrogen fertilizer and pesticides) and continued traditional farming, millions would have died.

Specter’s piece earned a lot of criticism for allowing equal time to the usual pro-GMO forces. Some of that criticism appeared in The New Yorker‘s mail section. Shiva herself wrote a detailed response that was published in Independent Science News.

The problem is that the general press doesn’t seem to know how to handle someone who has such conviction and passion, someone who speaks in frank and sometimes harsh language. The pro-business press knows what to do and smears, such as this one in Forbes, written by former FDA drug regulator Henry I Miller, embraces the myths about golden rice while avoiding any and all question of pesticides, fertilizers, and soil health.

Even the generally reliable Grist published an article during the height of last summer’s Shiva spectacle, that could only meet the activist halfway, based mostly on her presentation of exaggeration and occasional inaccuracies.

Much of the criticism of Shiva’s encompassing stance on the evils of big agriculture and seed ownership is narrowly focused. She sets the whole picture — the potential loss of seed diversity, the poisoning of our water supplies by agricultural run off, the loss of soil and viable crop land, the potential dangers that GMO crops can mean to human health — and this makes her very hard to argue with.

She also sees the larger, social questions involved when the raising of our food, and indeed our very lives, are left in fewer and fewer hands. Her best known quote, delivered at a Seed Festival in Florence, Italy last year (and quoted by Specter) casts a vision of two different worlds:

“One: a trend of diversity, democracy, freedom, joy, culture — people celebrating their lives. And the other: monocultures, deadness. Everyone depressed. Everyone on Prozac. More and more young people unemployed. We don’t want that world of death.”

No doubt as she rails against the kind of life that corporate control and concentration is leading to, Shiva will continue to be controversial. She’s not all about doom-and-gloom. She notes that young people across the globe are returning to the land and embracing small farming in an article she recently wrote for EcoWatch. That sounds like the beginning of a true grassroots movement.