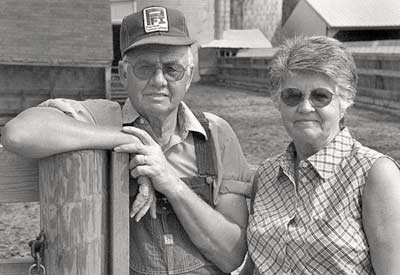 Corporate farming has disrupted an independent economic model and a way of life that was common just a few generations ago. Things were different when America’s farming economy was based on countless small, independent producers who then sold their products at rural cooperatives or directly to markets.

Today, a few large food producers including Cargill, Archer Daniels Midland and Tyson, and a few large (mostly) chemical companies, including Dow Agro Sciences, Cargill and, yes, Monsanto, have a corner not only on our food supplies but the products used to raise them. This consolidation of our farm and food supplies creates huge problems, not just in this country, but world wide.

With the right gardening supplies growing local, organic food is easy! Planet Natural has everything you need to get started: heirloom seeds, soils and fertilizers. Need advice? Visit our Vegetable Gardens Blog for the ideas, know-how and practical experience you need to get the job done right.

In the last few years, we’ve seen a reversal of this trend with independent, often organic farmers not only raising healthy food but being good stewards of the land. Yet the acreage involved is still minuscule compared to the vast miles of commercial farmland in the midwest, the south, and in California, where big corporate agriculture has a grip. But here, too, there are signs of change. We were reminded of this recently with the passing of Dick Thompson of Boone, Iowa, who early on saw that the chemical laden ways of big agriculture weren’t all they were cracked up to be and set about trying to find ways to grow his crops more efficiently and more successfully.

Thompson first embraced industrial farming on his 300 acres when he started out in 1958. “We purchased everything the salesman had to sell,” Thompson told the Rodale Institute in 2002. “The rotation was continuous corn, with high rates of anhydrous, herbicides and insecticides. We were building a kingdom where enough was not enough. When sickness became the rule and health was the exception on our farm, we knew things had to change.”

That change came in 1968. Thompson gave up on pesticides and herbicides. He started rotating crops for nitrogen replacement and soil building — corn-soybeans-corn-oats-hay — rather than planting corn year after year and saturating the ground with fertilizer (or simply rotating corn with soybeans). He developed a system of ridge planting that contained weeds naturally. After harvest, he planted a cover crop of rye. At the next spring’s planting, his cover crop was returned to the soil between the ridges, smothering weeds and improving the soil. He reintroduced farm animals into what is now mostly a monoculture of single crops, using humane breeding and raising practices as well as hormone and antibiotic-free feed.

Thompson — like all good farmers — kept meticulous records and they began to show that his yields per acre — and profits — were better than those who relied on the old industrial spray-and-pray system. Even when other farmers suffered losses, Thompson would turn a profit (he made it a rule not to accept payments from Federal crop insurance programs).

Thompson not only developed “new” effective, sustainable farming methods — over 50 research projects were conducted on his farm beginning in 1987 — he shared that information as best he could. Some 40,000 people visit the Thompson farm over the years. And Thompson was a founding member of Practical Farmers of Iowa, an organization devoted to sustainable farms. From their vision statement: “Farms that are prized for their diversity of crops and livestock; Their wildlife, healthy soils, innovations, beauty and productivity; Their connection to a rich past and a fulfilling present where individuals and families are earning a good living; Wholesome food that is celebrated for its connections to local farmers, to seasons, to hard work, and good stewardship.”

Thompson was also central to the creation of the Leopold Center For Sustainable Agriculture at Iowa State University, one of America’s premier farming and conservation centers.

In these days where we often think of big farmers as the villain — those same farmers often demonized in the public eye by the chemical companies that have sold them an expensive bill of goods — it’s important to remember that many of them are starting to see the light. Thompson wasn’t an organic purist. He wasn’t certified and even considered planting GMO Bt corn in an attempt to avoid using pesticides. But he did point the way to better profits by using fewer (or no) pesticides and chemical fertilizers. It’s best to remember him as a practicalist, someone who didn’t buy the bill of goods the agra-chemical companies are selling, and who found his own, more productive, earth-friendly way of farming. And that’s progress.