Scientific American On GMOs: Not So Scientific 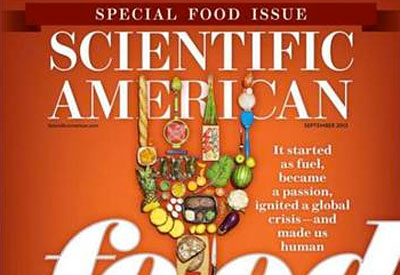 Scientific American, the mass-market monthly magazine, has created a stir with its full-out recommendation that food products containing ingredients with genetically-modified plant sources NOT be labeled (really?).  An earlier article from this summer’s food issue (subscription required, brief only) argued that GMOs have been proven safe; end of discussion. Let’s ask again . . . really?

Both articles call into question Scientific American‘s supposed objectivity. Narrowly focused on just bits and pieces of the issues, the magazine seems to have bought in fully to the corporate, pro-GMO arguments while ignoring the impacts raising genetically-modified plants have on plant diversity, the parallel uses of pesticides and herbicides required by GMO plants, and the threats posed to the freedom of independent, small American farms. Worse, its seems to white wash recent scientific evidence that some GMOs have proven harmful to the health of livestock and humans. What gives?

We can only hope that somewhere a motivated and brave investigative journalist is looking into any connection the author of the article or “the editors” who wrote the opinion piece masquerading as fact about labeling GMOs to the corporations who champion and profit from the spread of GMOs. The pieces sure take the company line in support of the questionable technology to heart, sometimes even word for word. We can’t help but be suspicious.

Criticism of the article came almost immediately. And that’s because its slant and obvious omissions are so blatant.

The most recent piece starts out with a factually-incorrect premise, something commonly known as a lie: “The U.S. Food and Drug Administration has tested all the GMOs on the market to determine whether they are toxic or allergenic,” it says. “They are not.” There are several hedges here, including what “on the market” means, but the truth is that not all GMO products have been tested for both toxicity or allergens. And some, after testing, are under suspicion that indeed they may be harmful to health.

There are all kinds of small misleading and implied digs at the GMO labeling movement in the story. At one point it makes natural hybridization sound more invasive than genetic manipulation. “Compared with conventional breeding techniques—which swap giant chunks of DNA between one plant and another—genetic engineering is far more precise and, in most cases, is less likely to produce an unexpected result.” Again, we have to ask . . . really? Cross pollination between two tomato plants, that natural swapping of  “giant chunks” of same species DNA isn’t as preferable to engineering the placement of a toxin in corn DNA, or something from a different creature all together, say pig DNA in a tomato? You don’t have to be paying casual attention to see how leading and misconstrued this statement is.

One of the more blatant falsehoods in the story concerns a study released just ahead of the GMO labeling vote in California that claimed the law would add $400 yearly to an average family’s food bill. That study, done by a private consulting firm, was proven misguided by later studies from the University of California at Davis and others. And it’s also not the case in countries with GMO labeling laws. But Scientific American doesn’t mention any of that.

The pro-GMO article even hedges on its conclusions. Its “In Brief” summary of the article suddenly isn’t so absolute about all research showing GMOs to be safe. And then, it says  “Yet not all criticisms of GM are so easily rejected, and pro-GM scientists are often dismissive and even unscientific in their rejection of the counter-evidence.” That’s a big admission: pro GM scientists often dismissive and unscientific? Talk about the pot calling the kettle black.

By narrowing the discussion and failing to note how introduction of GMO crops leads to the worst of monoculture farming and single corporate control of food sources the editors do the third world an injustice. Yes, “golden rice” may have slightly more Vitamin A than conventional rice. But it shouldn’t be deployed until its safety is assured and its proven its use won’t mean the demise of non-GMO rice crops that might better resist some coming plague of crop disease. There are better ways of feeding the world’s neediest — like promoting crop diversity, wise-land use, and small, independent farming — than turning the whole thing over to Monsanto. And this isn’t just about feeding the third world. The GMO question involves the whole planet.

One Response to “Scientific American On GMOs: Not So Scientific”