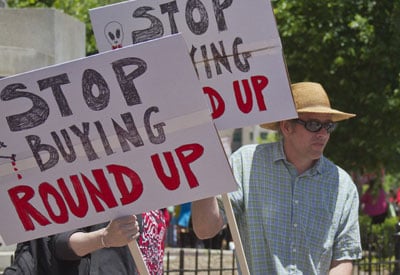 A review by the World Health Organization recently determined that glyphosate, the active ingredient in Monsanto’s Roundup, is “probably” carcinogenic. As reported in a study in the The Lancet (free registration required), the review, done by WHO’s International Agency for Research In Cancer, found that glyphosate increased risks for non-Hodgkin lymphoma as well as DNA and chromosomal damage. It implicates other pesticides as well.

Monsanto quickly responded, saying that there was “no new research here” and that relevant studies were omitted from the IARIC review. Several business news outlets gave Monsanto full voice. You can read Monsanto’s press release here.

Roundup has previously been implicated in studies as a possible cause of Parkinson’s disease, infertility, and cancers. To complicate matters, a previous German reassessment of data released in 2014 found glyphosate posed no unacceptable risks (hat tip to Institute of Science In Society).

Derived from corn gluten meal, bone meal and potassium sulfate, Concern® Weed Prevention Plus (8-2-4) provides a fast green-up and will not burn. Prevents crabgrass, dandelions and many other common weeds. Each 25 lb bag covers 1500 square feet.

The new report has stirred the controversy over pesticide safety and the entire GMO question.

A thoughtful look from Alice G. Walton at Forbes business magazine gives Monsanto its due but also considers the influence industry has on studies and testing. Walton reminds us of Monsanto’s reputation:

Monsanto has been blamed for a number of disturbing ecological and sociological trends: from a dwindling Monarch butterfly population in North America to the suicides of farmers in India. They are currently being sued by San Diego for polluting the San Diego Bay with PCBs.

Mark Bittman, the food and cookbook writer who devotes his opinion columns in The New York Times to nutrition and food safety issues, links pesticide and genetically engineered crops (the Monsanto GMO crops are engineered to resist Monsanto’s Roundup, a profitable way for the corporation to corner the market on both seed and spray).

Bittman (to our disappointment) isn’t against GMOs per say. But he definitely supports labeling and thinks pesticides can be dangerous. He points out the lack of independent science, or any science for that matter, when it comes to GMOs and GMO-related products like glyphosate. His headline says it all: “Stop Making Us Guinea Pigs.”

The comments to his piece are a distinct reminder of just how controversial the issue is. How many of the pesticide/GMO supporters writing draw scientific conclusion from a lack of science? Then there’s the irony when a commenter claims that anti-GMO voices are ignoring the science.

In calling for more science (and suggesting that Monsanto pay for it and get out of the way), Bittman wonders at our willingness to risk human health in the name of commerce rather than putting our well-being at the mercy of unknown dangers:

For this we have all too often paid with our damaged health. Rarely is that damage instantaneous, but it’s safe to say that novel biotechnologies broadly deployed may well have unexpected consequences. Yet unlike Europeans, Canadians, Australians and others, we don’t subscribe to the precautionary principle, which maintains that it’s better to prevent damage than repair it.

A call for more science, more study, more definitive conclusions might be the only thing that protects us. There is not nearly enough science for fair evaluations of the effects of GMOs and their associated pesticides. You would think that Monsanto and the others, believing their products are safe, would encourage more study to prove that their products are safe. Instead, they cherry-pick and resist. Are they thinking of our children? Or their profits?