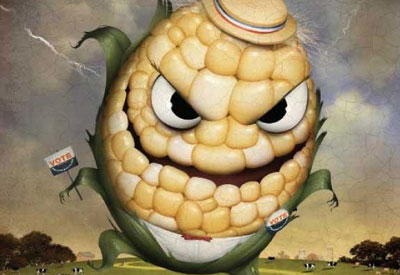 Our friends in California report a barrage of anit-Prop 37 ads on their televisions, thanks to the big money donors who are so afraid that people might be honestly informed about an issue important to them and their families’ well-being. But despite their best efforts to nip this food-awareness thing in the bud, California’s Proposition 37, the GMO labeling bill, is starting to gain more national exposure, not exactly what Dow, Monsanto and the other chemical corporations fighting the proposition want. And that publicity focuses on what’s the most important issue to fans of organic food and gardening: the use of pesticides — the over-use of pesticides — in the fields that produce our basic crops.

Last Friday, Gary Hirshberg, CEO of Stoneyfield Organic, author of the new book Label It Now: What You Need To Know About Genetically Engineered Foods (PDF) appeared on the HBO series Real Time With Bill Maher. He did a great job explaining the GMO labeling issue and why it’s important, especially regarding the increased use of pesticides. We’d link but HBO knocks down videos of the discussion on YouTube almost as soon as they appear. And your concerned Planet Natural Blogger would never link you directly to HBO… they can do their own advertising. But check it out, if you can. You can see a bit of it here.

Today we have Mark Bittman of The New York Times cutting to the chase. Here’s the take away:

What most genetically engineered crops have in common is that they’re bred to be super-resistant to chemical herbicides, chemicals that will kill pretty much everything except the specified crop. And as the weeds that those chemicals are meant to kill adapt and grow bigger and stronger, more and stronger chemicals are needed to try to deal with them.

And here’s the consequence: the spraying of more and more chemical herbicide and pesticide, compounds we know are harmful to our bodies and the environment at large, are creating chemical resistant weeds and pests. Not to fear, says Bittman. The companies that bring us GMOs and pesticides have an answer: 2,4-D, a component of Agent Orange and one of the world’s most effective (read “dangerous” sprays) – PDF format. Meanwhile, even farmers are seeing a problem with the use of 2,4-D and bio-engineered corn.

Are the anti-labeling forces playing dirty and fast-and-loose with facts, say like throwing in the name of a major university when said university wants nothing to do with the claim being made? What do you think? Meantime, if you need a laugh (and like Danny DeVito) here’s a tongue-in-cheek ad — “Trust Us” — that will help you see through the ad blitz that Californians are now experiencing… even though we know that GMO labeling is no laughing matter.