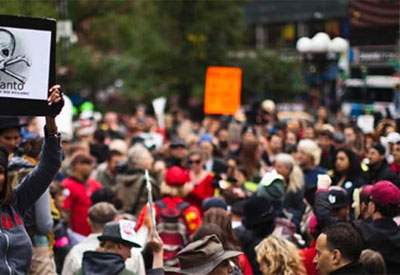 Today, as this is written, is the big day: the world-wide protests against Monsanto and GMO food. While your usually politically active Planet Natural Blogger will be traveling to visit his dear mother on the plains of Nebraska, a place where more than a few bushels of genetically engineered soy is grown, and won’t be participating in any rally (yes, there’s one right here at home, and, too, in our beloved, former home as well, we can’t help but be there in spirit. Here’s hoping our organic community, no matter where they may be, will report back on what happened Saturday in their location. Here’s a partial list of all the May 25th events that were scheduled to be held. Scroll way, way down to find the United States.

In the meantime, here’s an article detailing the history of Monsanto (notice that this article claims to have been monitored by U.S. Counter Terrorism apparatus) beginning with the company’s founding in 1901. Notice that Monsanto has been involved in a lot since then, including the manufacture of aspirin and the production of the first atomic bomb. The piece also gives a good accounting of Monsanto’s role in genetically modified crop production and the various tactics it’s used against farmers.

As citizens concerned with individual and environmental health as well as champions of the organic lifestyle, we’ve written a lot on GMOs. Often the battle against this corporate behemoth seems futile with even branches of our own government allied against us. But there are small victories, as witnessed by this. As we’ve often said about gardening and organics in general, knowledge is power. The more we know — and share with others — the more effective our actions against GMOs will be. Let us know what happened in your town on May 25.

One Response to “Protests Against Monsanto, GMOs”