Is it part of a backdoor effort by GMO producers to get ahead of the push to label? 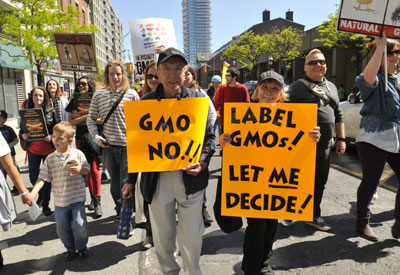 Idaho State Representative Steve Miller is calling for a national GMO labeling system for genetically engineered foods. Miller argues that a nationwide system would avoid a “patchwork” of labeling laws as states consider passing their own measures.

Miller’s call came after the Idaho Farm Bureau Federation expressed concerns that legislation introduced to ban GMO labeling state-wide would bring the wrong kind of attention to Idaho crops. The Bureau, on the record as pro-GMO, doesn’t want to make anti-labeling laws an issue. The passing of an “ag-gag” law in Idaho garnered heavy criticism — and a lawsuit — from consumers and humane treatment advocates.

At first glance, the call for a national labeling system seems a small step forward. Kansas Republican representative Mike Pompeo introduced a bill to Congress last year that would do something similar to Miller’s labeling call. Pompeo’s bill brought anti-GMO demonstrations to Washington in December. (It’s reported that Pompero will reintroduce his anti-labeling bill in the current session.)

Miller, said to be an organic hay farmer, told Northwest News Network that attempts to pass referendums in nearby states point to consumer demand for labeling. California, Washington, and Oregon have all tried to pass labeling measures through referendum. The most recent — Oregon’s — lost by only a few votes.

Miller’s call has something in common with Pompero’s legislation. Both will be voluntary. We have a hard time seeing how this will work.

Your thoughtful Planet Natural blogger has suggested that food manufacturers are starting to learn the value of GMO labeling. There’s a market — now seemingly more than a niche market — for foods with Non-GMO labels. Having seen what “gluten-free” labels have done for sales of certain products, farmers, especially independent farmers, see the value of alerting customers on the look-out for products that don’t use genetically engineered crops in their making.

The “voluntary” labeling program takes away the very thing buyers are looking for: trust. On the other hand, there’s a chance that those who don’t label will see their sales fall relative to their labeling competition.

Idaho has become something of a battle ground for the GMO labeling movement. The Idaho Statesman reported a “lively” debate held earlier this year in Boise between a Monsanto official and the president of GMO-Free Idaho at the Boise City Club. Meanwhile, the U.S. Department of Agriculture has approved a GMO potato. Potatoes are one of Idaho’s largest crops. (The irony here is that McDonald’s, one of the world’s biggest purchasers of potatoes won’t buy them for fear of negative publicity.)

When Congress considers a mandatory and true GMO labeling bill, one backed up with oversight, we’ll lend an ear. But that doesn’t seem likely to happen soon. Unless we make them…