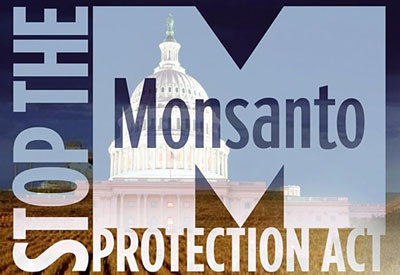 When Congress passed HR 933, the short-term resolution to avert a government shut-down earlier this month, it also snuck through an attachment that puts Monsanto ahead of the American judicial system.

The attachment, dubbed the “Farmer Assurance Act,” but known by opponents as “The Monsanto Protection Act,” limits the ability of judges to stop Monsanto or the farmers who grow its genetically modified seeds from growing or harvesting those crops even if courts find evidence of potential health risks. In essence, it precludes any court order that might be issued in the interest of protecting human well-being. Shame…

While the attachment will only be in effect for the time of the short-term resolution — until September from what your legislatively challenged Planet Natural Blogger can figure — it sets a dangerous precedent. It’s language is particularly bossy, arrogant and absolute: the secretary “shall, notwithstanding any other provision of law… immediately grant” temporary permits to continue using the seed. When? Even after it’s found to be dangerous to humans.

There was no discussion of the attachment when it was introduced. Missouri senator Roy Blunt (R) worked hand in hand with Monsanto to attach the resolution to the bill. Montana Senator John Tester(D) one of the few (and probably the only true) farmer in the senate opposes the attachment. “These provisions are giveaways, pure and simple, and will be a boon worth millions of dollars to a handful of the biggest corporations in this country,” Tester is quoted as saying in the the New York Daily News.

You can read more about this outrage and other big-agriculture attachments, mostly favoring corporate food and meat packagers over farmers and ranchers, at Politico.

Related: According to Reuters yesterday, “DuPont Co will pay Monsanto Co at least $1.75 billion in a new licensing deal and both companies have agreed to dissolve their bitter legal battles over rights to technology for genetically modified seeds, the world’s top seed companies said on Tuesday. The companies agreed to drop antitrust and patent claims against each other while forging the new collaboration, and agreed to toss out a $1 billion jury verdict DuPont was ordered to pay Monsanto last August.”

Both DuPont and Monsanto have been arguing over licensing violations and anti-competitive behavior for years. Now they end up in bed together. Read the full article for details. Litigious culture — corporate culture — indeed.

Meanwhile, south of the border: Monsanto is preparing to roll out its first genetically engineered soybean specifically designed for South America. The Intacta RR2 Pro — does that even sound like something you could grow? — will be planted by farmers next season with one big “if.” The Chinese, major buyers of the Brazilian soybean crop, must approve it first. As much as 85% of Brazil’s soybean crop already comes from Monsanto’s Roundup Ready, genetically modified seed. It’s believed that China’s recent leadership change has delayed what was seen as sure approval. If China does not approve the new GMO soy bean, it may mean the country will refuse Brazil’s entire crop. Monsanto planted test fields of the new bean and it’s likely that seed harvested from those crops has found its way into Brazil’s soy harvest. The bean was developed to increase yields that might mean Brazil would surpass the U.S. as the world’s largest soybean grower.

One Response to “Legislative Dysfunction and GMOs”