Producer of genetically modified seed may be held responsible ... for now. 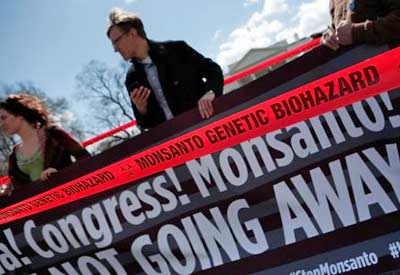 The Farmer Assurance Provision under Sec. 735 of the Senate Continuing Resolution spending bill, otherwise known as “The Monsanto Protection Act” won’t be renewed. The Senate bill to keep the government funded has dropped the vastly unpopular provision that was quietly added to another spending bill in March. The rider, which shielded sellers of genetically modified seed from legal action when GMO seed causes harm to human health or damage to crops of conventional farmers, was set to expire September 30.

House Republicans earlier this month had reinserted the provision in their continuing resolution that would have extended the rider that held Monsanto free of responsibility from any harm their genetically modified products would cause. But the Senate has stripped the provision from its bill.

“This is a victory for all those who think special interests shouldn’t get special deals,” Sen. Jeff Merkley (D-Ore.) said earlier this week in a statement quoted by The Hill. “This secret rider, which was slipped into a must-pass spending bill earlier this year, instructed the Secretary of Agriculture to allow GMO crops to be cultivated and sold even when our courts had found they posed a potential risk to farmers of nearby crops, the environment, and human health.”

Anti-GMO forces claim that the vast outcry from the public influenced Senators not to look the other way this time around. Some of the protest was directed at Mississippi Senator Roy Blunt who was accused of inserting Monsanto’s provision into the March spending resolution after receiving a $64,000 donation from Monsanto (Monsanto’s corporate headquarters are in Missouri). President Obama signed the continuing resolution containing the provision shortly after it was passed.

The victory may be short-lived. “Food Democracy Now!” is urging supporters to stay vigilant, citing reports that Representative Fred Upton of Mississippi is working to introduce a bill that would ban individual states from passing GMO labeling bills. The fight continues.

IN WASHINGTON STATE: The Seattle Times reports that the forces allied against the state’s GMO labeling initiative 522 have raised $11.6 million. That amount comes from just eight donors. Monsanto has supplied $4.6 million of that total, Dupont $3.2 million. By contrast, the pro-labeling forces have collected $4.4 million in total, less than the amount spent by Monsanto alone.

The Washington initiative closely resembles one that was defeated in California. There, anti-labeling forces outspent those who wanted to know if genetically modified ingredients were present in the foods they purchase by five to one ($44 million compared to $9 million). The California initiative lost 51% to 49%.

Much of the money collected by the No On 522 forces has yet to be spent. Folks in Washington should prepare for an onslaught of television, radio and mail advertising that, if California is any indication, will be based on lies, exaggerations, and smears. Do we need to tell you which side will be spreading those?