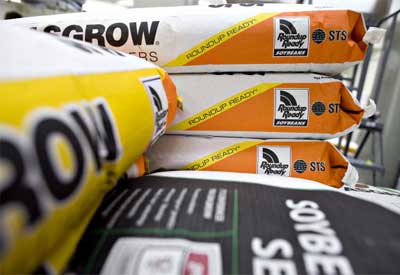 It’s been known for sometime that the GMO patent on Monsanto’s Roundup Ready 1 soybean will expire in 2014. As early as 2011, Monsanto claimed that it would not stand in the way of farmers who would use what will become the generic drug equivalent of their Roundup Ready 1 seed, purchased from whatever seed company would pursue making the supposedly herbicide -resistant soybeans.

Why would a company with a somewhat evil reputation for protecting its seed patent allow this to happen? First, remember that the genetically engineered soybean is resistant to Monsanto’s Roundup, the most intensively applied agricultural herbicide in the U.S. Even those farmers who choose to grow the generic, knock-off soybean presumably will still be buying Monsanto’s Roundup to spray on their crops.

This is not big news or any kind of victory for organic farmers, healthy food advocates, and those interested in stopping the environmental impacts of GMO agriculture. All of the same problems connected with Roundup Ready 1 seed will occur with Roundup Ready 2. (It may be too early to tell which weed varieties will build a resistance to the Roundup herbicide after the Genuity seed comes into widespread use, assuming the herbicide formula will remain unchanged.)

Butterflies and GMOs: It’s been widely reported that this year’s migration of monarch butterflies to Mexico is the smallest, drastically smaller by some measurements, in history. A variety of causes are blamed, including continuing drought and the loss of farmland in the U.S. Some reports have, suspiciously, ignored another factor: GMO, herbicide resistant crops. With nearly blanket spraying of Roundup and other herbicides on agricultural fields, the monarch’s traditional food — milkweed — is being eliminated from fence rows, drainage courses and the fields themselves.

Earlier, this phenomenon connected to herbicide use, has been cited as a major reason butterflies (and other insects, including bees) were declining. While some daily papers of record (not all) suggests more than sloppy journalism. But, then again, maybe it’s just sloppy journalism.

GMO labeling in Vermont: Here’s an interesting article on one man’s resistance to a proposed GMO labeling law in a state where some 90% of the population support labeling. Sadly, that man happens to be the governor. Vermont had trouble after passing a poorly designed law in 1994 requiring the labeling of milk which used rBST in its production. The state was sued by the producer of rBST (or rBGH, a synthetic growth hormone) and lost. And who was that producer (link no longer found)?

The Vermont governor, Peter Shumlin, is using this and other arguments again the GMO labeling bill. Your somewhat cynical Planet Natural blogger can’t help but ask: is he sincere? Does he really want to go against the wishes of the vast majority of his state’s people? Stay tuned.