Bayer and Monsanto Tie the Knot 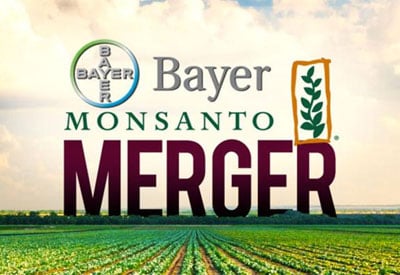 German drug and pesticide manufacturer Bayer has agreed to purchase St. Louis-based seed and agrochemical giant Monsanto in a deal worth $66 billion, reports Reuters News Agency. Bayer, once considered for purchase by Monsanto, will become the world’s largest seed producer while controlling 25% (some estimates are higher) of the world market for seed and pesticides.

The announcement comes on the heels of the announced merger by Swiss seed and agrochemical corporation Syngenta and the state-owned China National Chemical Corporation (ChinaChem). U.S. chemical companies Dupont and Dow are also pursuing a merger.

The purchase of the controversial American giant of genetically engineered seed and associated herbicides is the all-time largest purchase of an American company by a German interest and the largest all-cash deal on record. Before it can be signed, the deal will face scrutiny by some 30 regulatory agencies scattered across the globe, including European and U.S. antitrust officials as well as the American Congress.

The Christian Science Monitor has reported that some Monsanto board members have questions about the deal’s price and the operational autonomy left to Monsanto. Bayer board members, fearing dilution of the company’s medicines business, have also expressed doubts.

Public resistance to the deal is building and for good reason. The Monitor says that the deal has the potential to leave “farmers and consumers to deal with fewer choices and higher expenses.” The Wall Street Journal says that, as always, the bottom line has been driving the current wave of mergers: “Seed makers, having laid off thousands of employees and mothballed some research projects, regard mergers as a way to cut costs while more deeply integrating the development of new seeds and chemicals.”

In other words, these mergers mean less, not more, jobs. And as costs farmers pay to these market-controlling corporations rise, it may put some of them out of business as well. Such mergers may also mean higher prices for consumers, even as farmers who produce that food make less.

Those of us who see diversity in farm production, farm business and seed raising as major issues can only see this and other buy-ups as a giant step backward.

Business-friendly financial networks including Bloomberg pretty much echoed the two companies’ position on the deal, saying that the merger has “revived” the GMO controversy. Some are claiming that the sale is an attempt, not only to get the European Union to reconsider bans on GMO crops and certain pesticides, but also to whitewash the name Monsanto from the GMO debate. Monsanto has garnered bad publicity for its legal bullying of small and larger farmers, not to mention it’s dangerous pesticides and questionable, genetically engineered seeds. It’s as if the merger gives Bayer-Monsanto a do-over for all this. (No word has been given by Bayer on whether or not the new company will employ the Monsanto name.)

Those of us with a stake in organic gardening, healthy food stocks, a safe environment for our children and wildlife, corporate responsibility, the protection of natural seed diversity and cleaner, more productive agricultural practices (in other words, all of us) will be watching to see how those elected and appointed to serve our well-being, economically as well as environmentally, come down on this one and the other mergers now pending.

At this point, the Bayer-Monsanto deal isn’t expected to close until the end of 2017. Let’s all keep watch to see who’s best served: the people or the giant, international conglomerates.