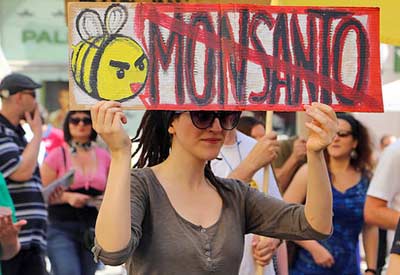 We’ve heard this story before. Anti-labeling forces in Colorado and Oregon are working from the same playbook that previously scuttled GMO labeling measures in Washington and California, spending vast sums of cash donated by the same corporate interests on misleading and false advertising. Sadly, they’re reaping the same results.

The Wall Street Journal reports on polls from both states. One, released in late October and commissioned by the Oregonian newspaper and NBC affiliate KGW, shows 42% respondents in support of the Oregon measure and 48% are against it. The reason? As the Journal reports:

Both supporters and opponents of Oregon’s Prop 92 have funneled millions into the campaign, making it one of the most expensive ballot measures in the state’s history. Among the largest donors against the measure are PepsiCo Inc., Coca-Cola Co., Kraft Foods and seed companies DuPont Co. and Monsanto Co.

Notice the Journal‘s fair and balance reporting — “both supporters and opponents… have funneled millions.” As Democracy Now reports, foes of labeling have poured over $21 million into fighting the measures. Supporters have spent less than a third of that. In Colorado, the no forces had gathered some $14 million to fight against the measure. The yes forces were working with $400,000 dollars.

The Reuters news service put it another way:

Fresh polling showed support for the Oregon GMO labeling law waning in the face of a well-funded onslaught of advertising from labeling opponents, and pro-labeling Colorado campaigners still could not muster enough money for television ads to counter thousands of ads by labeling opponents.

Judging from the content of the advertising, the reporter may as well have written “thousands of lies by labeling opponents.”

In Colorado, the chances of passage have not been good. A recent Suffolk University/USA Today poll found that 30% of respondents were in favor of the labeling measure while 49% opposed it. But in Oregon, early polls showed the measure passing with a significant margin. What’s changed? Supporters of the measure in Oregon, with support of some organic product companies, had $4 million. Still, in the last days of the election, the pro-labeling forces have been badly outspent as Monsanto and other corporate interests have poured in money. Most recent totals, as reported by The Oregonian, show opponents have raised just over $16 million and backers have raised nearly $7 million.

The Oregonian‘s poll, released a week before the election, in contrast to the Reuter‘s report showed the measure trailing by 6%.

Beyond the crucial issue here, there’s a disturbing pattern that suggests that money — huge, special interest money — does influence voters. When that money is spent promoting distortions and outright falsehoods, it can change an otherwise supporter’s mind. This has serious implication for our democratic process and our country as a whole.

What lesson can we draw from the way previous elections went in California and elsewhere, and now Oregon and Colorado? We all know that money talks. What we’re finding out is that people listen.  Please let us know what you think, in comments over at our GMO Forum page a great place to exchange ideas and get into details. What’s the most effective way for GMO labeling supporters to counter the often false claims by Monsanto and others that, when repeated often enough, seem to sway voters?  If you live in Colorado or Oregon, you know what to do. Let’s keep our fingers crossed that voters give us, give themselves a victory.