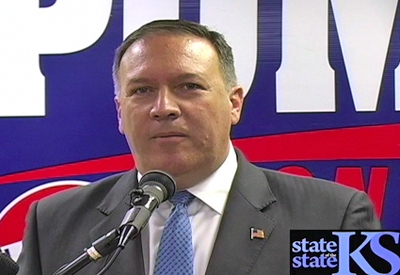 Representative Mike Pompeo, Republican of Kansas, introduced a bill earlier this month that would effectively block labeling of foods containing genetically modified ingredients at both the state and the national level. Pompeo’s bill is a nearly exact copy of a legislative proposal released in January and written by big agricultural and grocery business interests. The Grocery Manufacturers Association was instrumental in defeating Washington State’s GMO labeling initiative last year after flooding the contest with money from its corporate sponsors.

The Environmental Working Group has the story here and an interesting opinion piece that dubs Pompeo’s bill the “Deny Americans the Right To Know” or “DARK” act (a name that seems to have caught on) here. Surveys consistently show that some 95% of American support labeling of foods containing genetically engineered or modified (GMO) ingredients.

The bill falls in line with a rash of “ag-gag” laws seeking to prohibit filming or other documentation of food processing, specifically animal slaughter and meat production, that agricultural interests fear will turn consumers away from their products. Even business oriented Forbes magazine has pointed out the wrong-headedness of criminalizing the spread of information in attempts to deny consumers the right to know how their food is made.

Pompeo’s bill, H.R. 4432, would nullify any attempts by states to require GMO labeling and comes on the heels of the Vermont legislature’s attempt to require labeling. The Vermont Senate recently approved the legislation on a 28-2 vote. The bill will now go back to the Vermont House, where it had already passed, to approve the senate’s changes.

The Kansas Farm Bureau is seeking to drum up support for Pompeo’s legislation. They’ve recently posted a list of suggested “examples” for constituents to post on Pompeo’s Facebook and Twitter accounts. Suggestions include “GMO crops help feed the world. Thank you @RepMikePompeo for helping to feed the hungry around the globe,” and ” Less money spent on food means more money for clothing, shelter, and education. Thanks @RepMikePompeo for supporting GMOs!” Here a suggested comment seems especially ridiculous, since facts show otherwise: “#GMOs use less water & pesticides, reduce crop prices by 15-30%. Proud to support @RepMikePompeo for his work on the issue! #StandWithPompeo.”

Not all comments on Pompeo’s Facebook page support what he’s doing. Maybe you’d like to add a comment telling the Representative what you think and why (remember to be polite and appropriate when stating your views)?

In the meantime, why not contact your own Congressman about the issue? We assume that the intelligent and well-informed readers of the Planet Natural Blog don’t need a farm bureau or some other pro-Monsanto or corporate agriculture interest to tell them what to say. Just Label It! has other suggestions for actions to take. Tell your own story and get your opinion out there. And share it with us as well.