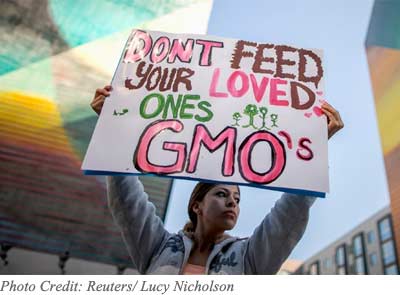 It’s deja-vu all over again. As Colorado and Oregon prepare to vote on the latest round of GMO labeling initiatives, the press continues to let the pro-grocery, no-labeling forces set the agenda. Media accounts frequently take the arguments of initiative opponents without challenge. They focus on narrow, single-exclusion issues like the “chewing gum exemption” and other forms of smoke-blowing. And, they overwhelmingly report, there’s no proof genetically engineered food products are any different than naturally-bred hybrids.

Mostly, they’re just naive. Here’s National Public Radio’s “All Things Considered” report on the initiatives. Really? “Many scientists worry labels could confuse consumers, especially given the proposals’ exemptions. The meat or milk from a cow that had been fed GMO corn and hay wouldn’t be labeled. Neither would chewing gum, alcohol or pet food.”

What we’re seeing is the same set of distortions and false claims that were unleashed in the defeat of Washington’s I-522 labeling initiative last year and California’s ballot measure in 2012. The discouraging fact is that they’re all going unchallenged — again — in the press.

Often, GMOs are glorified. Here’s one you hear: we need genetically engineered crops to feed the world. More production! In reality, it doesn’t work that way.

The message is being carried and paid for by some of the same players as in the Washington, California and other labeling battles. Check it out: Monsanto has spent $1.5 million against the measure in Oregon. They’ve spent $4.7 million in Colorado. Other corporations — Coca-Cola, Kraft, Pepsico, Kellogg — have also dropped significant sums. A total of $5.7 million has been raised to fight the initiative in Oregon. All of it came from out of state businesses.

On on the ground, newspaper editorial boards are falling for the opposition hard. You’d need a full sheet of paper to list all the falsehoods in the Denver Post‘s editorial (link no longer available) urging a no vote. It’s the same sort of narrow argument that starts with cutting out exceptions (What about GMO sugar beets? By the time they’re processed into crystal there’s no DNA material left. What about them? … that sort of thing.)

One of the biggest lies takes a shot at environmentalists. “Some would ban GMOs, which ironically have resulted in a large decrease in the use of insecticides,” says the Post‘s editorial. The truth here is that insecticide and herbicide use is on the rise. And you don’t have to be an environmentalist to know that’s a bad thing.

There are exceptions to the negative press coverage. But it’s surprising to see that the larger the media, the more apt it is to hear the corporate food producers’ argument. In the meantime, here’s the good guys: Oregon … Colorado. We’ll keep an eye on this, of course. Meantime, the polls, such as they are, lean favorable.