Should We Label GMO Foods “Natural”?

The National Grocery Manufacturers Association wants us to believe that black is white. 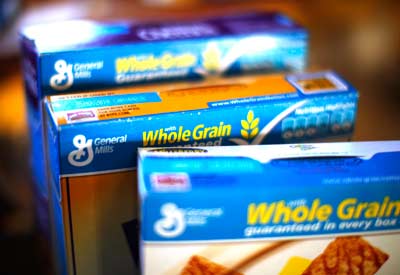 We knew that the forces allied against GMO labeling — not just the large chemical corporations that manufacture genetically manipulated plant seeds and the products (herbicides, pesticides) associated with them, but stand-ins for the corporate food industry as well — would go on the offensive after defeating labeling initiatives in Washington State and California. Now we’re getting a clue as to the direction this movement will take.

Grist reports that the National Grocery Manufacturers Association, a group that provides name cover for corporations including Coca-Cola, ConAgra and General Mills as well as Bayer CropScience, has written the Food and Drug Administration. The letter declared the Association plans to push for use of the label “natural” on foods that contain genetically modified ingredients. The New York Times also has the story.

At the same time they’re asking for permission to label “natural” a product created in a laboratory and not in nature, the Association continues to push for “uniform legal requirements,” as the letter stated, on requirements — or lack of them — regarding GMO labeling at the Federal level. The goal is to block the results of ongoing state labeling initiatives and overturn those already passed as well as prevent future action by the states.

The effort to have the FDA issue a nation-wide ban on GMO labeling is an attempt to hide the truth. The efforts to allow food manufacturers to use the word “natural” on foods containing genetically modified products is an attempt to change it. The question becomes how much influence does the Grocery Manufactures Association and other corporate food and agribusiness have over the FDA? Enough to convince them that foods with genetically modified corn, soy, canola, sugar beets and the sugar made from any genetically manipulated crop, should be called “natural”?

We here at Planet Natural are particularly sensitive to the use of the word “natural.” We carry products certified by the Organic Materials Review Institute as well as a long list of truly natural products used to keep harmful chemical pesticides and fertilizers out of our gardens. We don’t hide information, we provide background, list ingredients, and makes sure to note any cautions connected to the product. We listen to feedback. And we don’t use the word “natural” lightly. We resent it when someone, in this case the NGMA, tries to make the term meaningless. After all, it’s our name.

Colin O’Neil of The Center For Food Safety reminded the FDA in a press release that it’s their policy that food labels “can’t be false or misleading.” O’Neil and The Center say there’s nothing natural about genetic engineering and asks why the Grocers Manufacturing Association wants the FDA “to create a special exemption for them. We urge you to click over and read the full release. But in a way it seems absurd that we’re wasting time with people who want to basically argue that bad is good. Could it be their blinded by greed?

We’ll climb off the soap box now after encouraging you to write your representatives and the FDA that we oppose the “natural” label for products with GMOs. We all should keep paying attention to this.

—Bee collapse update: We forgot to mention an important point in our recent post on bee collapse disorder. The chemicals Bayer and others push on beekeepers, especially commercial keepers, to spray in their hives to control varroa mite might make their way into your honey. A New Mexico beekeeper told us that the chemicals are deemed safe because of their sparing use. But those chemicals collect in the hives, specifically in the bees wax. At a certain point they begin to harm the bees even as they encourage resistance among the mites.

This keeper, who admitted that varroa mites are present in New Mexico but not the problem as they are in moister climates. He also said he does treat his hives occasionally if needed, but with oxalic acid, a naturally occurring compound that’s found in spinach and other leafy greens.

We’ve always felt that honey was a pure and natural product. The news that commercial honeys may possibly contain trace amounts of chemical pesticide bothers us. It’s another argument for seeking out local beekeepers and sources of honey. You can talk to them and ask them if they treat their hives and how. Best bet? Your organic farmer who keeps bees.