Want the tastiest healthy broccoli, hybrid or heirloom? Grow it yourself. 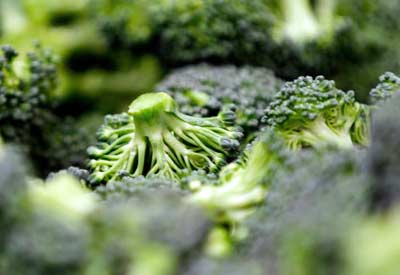 That so-good-for-you vegetable — broccoli — is in the news. A “dream team” of botanists, agrarians, and marketers has come together at Cornell University to create a broccoli that will grow in areas where the heat-sensitive cruciferous won’t normally grow. And therein lies the problem.

Since nearly all commercial broccoli is grown in California, the plant suffers days of transportation before it’s delivered to midwestern, southern and eastern markets, a time that saps the broccoli of its fresh taste and snap. The new hybridized broccoli can withstand the relative evening warmth and humidity that has made successful commercial farming of broccoli east of the Rocky Mountains difficult. The New York Times has the story.

A nutritious powerhouse, home-grown broccoli beats anything from the market.

Planet Natural offers heirloom broccoli seeds that are non-treated, non-GMO and NOT purchased from Monsanto-owned Seminis. Planting instructions are included with each packet and shipping is FREE!

The piece is actually a double profile of both broccoli and the plant physiologist who fronts the broccoli effort, Dr. Thomas Bjorkman. Bjorkman, himself a vegetarian, has envisioned making broccoli more readily available in American markets. He’s also sought to make it more palatable and nutritious. Apparently he’s succeeded. The new hybrid broccoli contains more glucoraphanin, a compound that’s been found to prevent cancer.

It’s claimed that the new broccoli, developed by Mark Farnham, a federal research geneticist based in Charleston, S.C., compares to broccoli purchased at farmers markets or grown in your own garden. The stale, sometimes woody, sometimes rubbery broccoli so disliked by most children and a certain former president, is a result of the commercial varieties that are shipped and sit days in grocery stores. This new stuff, it’s said, tastes better. Where have we heard that before?

But this new plant is a hybrid, not a genetically engineered organism. Though it was conceived in a laboratory under perfect conditions, it uses standard, traditional hybridization — not the genetic mutation process that defines GMOs — to bring together its signature traits. Many critics, often GMO supporters, claim there’s no difference between hybrids and GMOs; but, of course, there is. So what could possibly be wrong with the new broccoli?

Plenty. Bjorkman, in an effort to get his broccoli out to farmers and into markets, has collaborated with Monsanto, the same people who dominate both the GMO and hybrid seed business. The Times article quotes Marion Nestle, a New York University nutrition professor and author of Food Politics “saying that it’s just part of Monsanto’s drive to control the seed and food industry.” Should one corporation have that level of control over things people depend on?” she asks. The article also states that Bjokman and Monsanto say they don’t intend to use genetic engineering techniques when it comes to broccoli. (Monsanto has already engineered both GMO summer squash and sweet corn.)

One of the takeaways from the article is something we already know: locally grown, preferably home-grown broccoli can’t be beat for flavor and nutrition. We commend Dr. Bjorkman for trying to bring that quality to the mass market. But we can’t help but be cynical about anything that involves Monsanto.