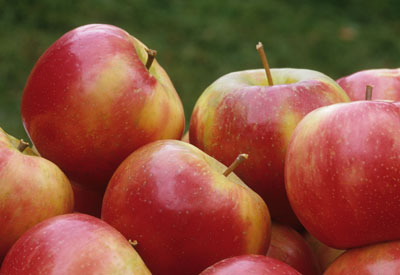 We don’t mind admitting that honeycrisp apples, a fairly recent newcomer to the world of apples, are our favorite apple for just plain eating. Their tartness balanced with a suggestive sweetness and the snap that comes with biting into one make for one of fall’s great gastronomic experiences. The apple, developed at the University of Minnesota in 1960 and released to growers and consumers in 1994, also helps illustrate a common misconception regarding genetically-modified organisms and those developed through hybridization.

The honeycrisp was developed by cross-pollination of two previously known apples: the honeygold, itself a cross between the golden delicious and the honeygold, and the Macoun. While this process can happen naturally by the wind or various pollinators (like bees), the honeycrisp was given help. The trees that produced the honeycrisp were hybridized, much like some of the tomato seed you might have used in your garden (though these are nearly always “sterile” hybrids which do not produce “true” seed or seed that will result in the same hybrid… but they will self-pollinate to produce fruit). Honeycrisp seed is also not true and will not produce like trees (most fruit trees are propagated through grafting, root-cuttings and layering, new types can only be developed through cross pollination, according to David Bedford, a scientist in the University of Minnesota’s horticultural department). While the tree’s seed is sterile, established trees will bear true fruit if pollinated with group four apple pollinators which includes Fuji, gala, golden delicious and several other apple types.

The evolution of “sweet” apples, as opposed to “bitter” apples (like crab apples) happened naturally, four to six thousand years ago. Cross-pollination also happens naturally between plant types and species that are genetically accepting of each other. But genetically-modified plants have DNA changes forced upon them in a laboratory. No such change could happen immediately in nature (without dozens or even thousands of years of evolution). And the results of forcing DNA material into a plant’s genetics can have unexpected, undesired consequences. A genetically-modified potato that produces its own insecticide might seem like a great idea, but in reality proved dangerous.

Now, I’m no botanist. And if the explanation above seems a bit difficult, please forgive me. But the point is this: next time you see some GMO supporter in the comments section of a blog or the letters section of a newspaper claiming that hybridization through cross-pollination, grafting or other means is exactly the same thing as what scientist do on the cellular level when they force genetic material into the DNA of an existing plant (while suggesting that those leery of GMOs are dumb or worse), don’t believe it. As the potato example above proves, GMO foods require testing and once tested, the fair dissemination of the results. There’s too much at risk, as past tests on GMO-produced foodstuffs have shown. And often, the corporations that are developing GMO vegetables and fruits have motivations other than producing a quality product, including creating plants resistant to herbicides, giving longer shelf life for perishable products (including such things as apples that don’t turn brown), or, like those potatoes, vegetables that will kill the insects that attack them. Often, the unstated reason, is to control sales. Seed patents on crops resistant to patented herbicides mean big money. The honeycrisp was also patented by the University of Minnesota but that patent has expired (here’s a link to a wonderful story on the honeycrisp and the University’s breeding program). Given the choice between a GMO potato and a hybridized apple, this honeycrisp lover will take the apple every time.