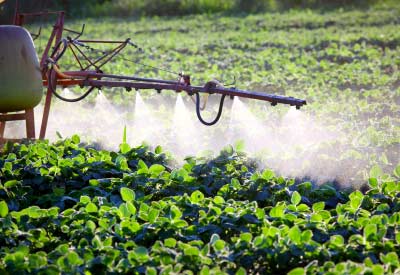 An article in The New York Times seems to celebrate weeds: their hardiness, their adaptability, their ability to quickly evolve. It’s overall theme? In the battle between weeds and chemical herbicides, weeds eventually and always win. And while it takes some reading between the lines, the article also draws conclusions that organic gardeners have known all along. One… herbicides can be dangerous. Two… a variety of techniques, many of them organic, are needed to actually reduce crop losses caused by weeds.

So why use herbicides? Their development (PDF) was thought to be a tremendous breakthrough. As far back as Roman times farmers spread salt on their fields to destroy their enemies’ crops. Modern weed killers were introduced during World War II and their use skyrocketed after that. Chemical companies soon learned that herbicides meant big money. But almost as quickly, weeds began to develop resistance to the chemicals. Today, it’s estimated that at least 217 varieties of weeds have developed resistance (follow the link to see a frightening photo of giant ragweed taking over a field of Roundup resistant corn).

We’ll admit it. When we see weeds creeping into our carefully tended gardens, it makes us cringe. Fortunately, there are plenty of effective, organic weed-eliminating options that are safe to use around your children, pets, and vegetables – and won’t build up in your soil (or crops).

Here’s one of the takeaways from the Times story:

For decades, farmers have responded to resistant weeds by turning to new herbicides. But a number of scientists argue that we need to get off this treadmill. They argue that we can find more effective ways to fight weeds by appreciating how well they’ve done at our expense.

How are chemical companies reacting to resistance? By coming up with new sprays. And if one spray won’t work? Use more, or, use two different sprays.

Though it barely mentioned in the Times story, the use of herbicides has caused tremendous environmental damage as well as having health consequences in humans. New horror stories seem to pop up everyday. And evidence of the harmful effects on Roundup, the most widely used herbicide, continues to mount. But what’s a few human lives (okay, more than a few) measured against combating something that claims as little as 10% of the world’s agricultural production?

Okay, that 10% can be substantial when you’re trying to feed the world’s growing population (though most experts now agree that hunger issues don’t result from a lack of production but come from ineffective distribution). But why, when it comes to controlling weeds, should we keep using a failed solution that only does us harm? What changes need to be made?

The answer is buried in the story: common sense, multi-faceted organic solutions.

The good news here is that many scientists are seeing the futility of trying to stay ahead of weed resistance with new and stronger chemicals. Of course, organic gardeners and farmers are way ahead of corporate agriculture on this. But then, we’re not so interested in putting the bottom line ahead of effective solutions and environmental health. Until big agriculture and chemical interests see the light, weeds win.

How do you control weeds in your lawn and garden the organic way?

Note: Most organic herbicides work by removing or “burning” the waxy cuticle of green plant tissue. Once this protective layer is destroyed, plants dehydrate and die quickly. Weeds can NOT develop resistance to this mode-of-action. 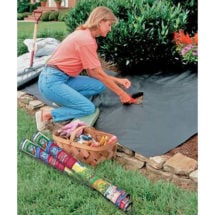 Easy to use, just cut this 20-year landscape fabric to fit and cover with mulch. 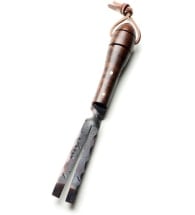 Made from one solid piece of steel and set into a walnut handle with brass rivets.

One Response to “Weeds vs Herbicides: Weeds Win!”