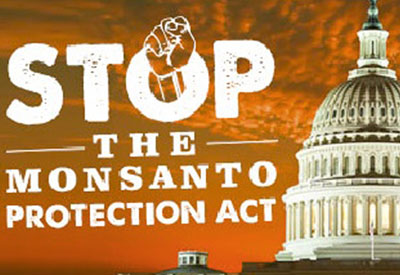 Enough Fault To Go Around: It’s been pointed out that the “Farmers Assurance Provision,” popularly known as the Monsanto Protection Act, was signed by President Obama into law last Tuesday. This hasn’t earned the President any fans among those resisting the use of GMOs in our foods.

As some have pointed out, the bill was mostly about the continuing budget resolution to keep the government afloat and included the Violence Against Women Act and State Nutritional Assistance Program (though neither of those was kept secret and anonymously offered as was the Monsanto Protection Act). Your politically frustrated Planet Natural Blogger — I’m sure I have a lot of company here — thinks that riders of this type should stand alone, that attaching them to budget bills is a hoodwink and/or form of blackmail. Protect Monsanto or the whole country goes down! Shame on us all.

On a brighter, but too-little-too-late note… at least one Senator is showing some regret that the Monsanto provision was included in the budget bill.

Sorta Change of Heart:  Nation of Change thinks it’s found the reason Whole Foods has decided to require GMO labeling (link no longer available) by the year 2018: their initial failure to support last fall’s California labeling initiative and the fact that, after much pressure to support the law, they offered only a lukewarm endorsement and no money. Consumers weren’t happy. The article also reveals something we didn’t know: Whole Foods made a promise in 1998 to remove all GMOs from its house brands. Apparently, according to Nation of Change, that promise hasn’t been kept. The piece is also worth reading because of the way it addresses the 5 year delay in labeling. Recommended.

Pennsylvania labeling: In the meantime, Pennsylvania State Senator Daylin Leach has introduced legislation that would require the labeling of all food products containing genetically-modified ingredients in his state. Best take-away from Lynch’s announcement of the legislation:

Essentially the industry’s position boils down to “consumers shouldn’t be told what products have GMOs in them because they won’t be able to understand or intelligently process the information.” To me, this grossly underestimates the intelligence of the average consumer, and it arrogates to the food industry the right to decide what’s good for you to know and what isn’t, which is a terrible precedent. The fact that the industry is deliberately and aggressively fighting for the ability to keep relevant information from consumers about what they are feeding their families boggles the mind and should offend everyone.

Bee Aware: Last year was a bad one for bees, with 40 to 50% of bee colonies needed for pollination wiped out. While this New York Times article says the cause is “mysterious,” the article lists several probable causes. One is the class of pesticides known as neonicotinoids. The effect of neonicotinoids on bees has not been studied as extensively as other pesticides. Another suspected cause is the “soup” of pesticides and herbicides used in industrial agriculture; in other words the combined effects on bees of all these toxins used on agricultural fields considered together.

In related news, beekeepers and environmental groups have sued the Environmental Protection Agency for its failure to protect pollinators against dangerous pesticides. “America’s beekeepers cannot survive for long with the toxic environment EPA has supported. Bee-toxic pesticides in dozens of widely used products, on top of many other stresses our industry faces, are killing our bees and threatening our livelihoods,” plaintiff Steve Ellis, a Minnesota and California beekeeper, told the Center For Food Safety. “Our country depends on bees for crop pollination and honey production. It’s time for EPA to recognize the value of bees to our food system and agricultural economy.”