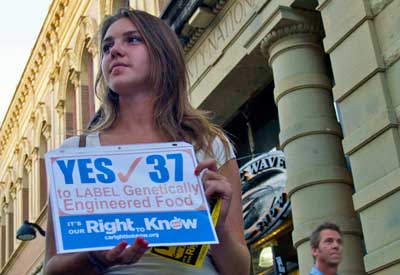 The GMO products issue is gaining attention worldwide, a fact that can only help the cause against them. In the U.S., it’s currently focused on labeling. Should consumers have the right to know what products they’re buying has been made from genetically-modified crops? This article in today’s New York Times, centered on activists fixing GMO labels on products, serves to demonstrate just how complicated the issue is while emphasizing the forces arrayed against those demanding simple product labeling. Who is it that fears what GMO labeling might do to their sales? “…conventional farmers, agricultural biotechnology companies like Monsanto and many of the nation’s best-known food brands like Kellogg’s and Kraft.” We’re talking big money. The article estimates that tens of millions of dollar will be spent ahead of the vote on California’s referendum on labeling GMO products. Want to guess which side will have the most to spend?

Other interesting tidbits from the article: Oprah has joined the fray. And there’s a new ap for those looking to find non-GMO food products while shopping for their families; ShopNoGMO.

Meanwhile, activist in Mexico have stopped a bill that would implement “a privatizing model that uses patents and “Plant Breeder’s Rights” (PBR) to deprive farmers of the labor of centuries in developing seed.” Questionable legal rulings on patent laws in the United States have allowed Monsanto and other corporations to intimidate organic farmers and others who have had their fields inadvertently polluted by GMO seed. Small farmers in Mexico organized quickly and succeeded in convincing legislators not to offer the proposed bill. But, the controversy isn’t over. Corporations are expected to pressure legislators to introduce the bill once upcoming elections have concluded. I wonder if corporate money is as influential in Mexican elections as it is here in the U.S? The struggle continues.