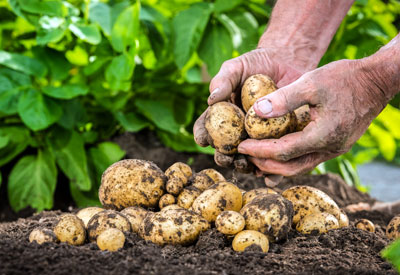 Potatoes genetically engineered to resist bruising and contain less of a suspected cancer causing agent were approved November 7 by the United States Department of Agriculture for commercial planting. A story in The New York Times says the potatoes were developed by the J. R Simplot Company of Boise, Idaho, the first company to provide potatoes to the McDonald’s hamburger chain beginning in the 1960s. Simplot continues to provide the international fast-food chain with potatoes.

The GMO potato raises a variety of questions and a host of issues when it comes to the engineering and the marketing of GMO crops. Is there ever a time when genetic engineering is okay? And what is the real motivation behind offering this “less cancer-causing chemical” potato to the grower and the food supplier that uses them? As always, history is informative.

An earlier edition of GMO potato, the “NewLeaf” created by Monsanto to repel Colorado potato beetle and introduced in 1995, never gained more than a 5% share of the potato market. Farmers were unwilling to pay the higher price asked by the company, justified, it claimed, by the money farmers would save on pesticide. Monsanto abandoned the potato completely in 2001 after consumer safety advocates asked major potato buyers, McDonald’s among them, not to use the genetically altered product.

McDonald’s is again being asked not to buy genetically engineered potatoes. In 2013, Food & Water Watch, the D.C.-based watchdog group, mounted a petition campaign urging McDonald’s, in the interest of its consumers, to refuse the potatoes that were then still being considered by the U.S.D.A.

But the issue this time is subtly different. The new potato comes from Simplot’s “Innate” line of GMO development. Rather than shove just any old genetic material into the plant they want to modify, like Monsanto did with the NewLeaf potato, it only shoves in genetic material from other potatoes.

Simplot claims that “no new allergens” are introduced to the potato. The claim acknowledges one of the most serious concerns about GMO crops, be it corn, canola, or soybeans. GMO engineering creates new allergens. Of course, a claim of “no new allergens,” without independent verification, is just a claim. If Simplot wants to complain that we’re unnecessarily suspicious, it should blame Monsanto, not us.

So here’s our suspicion. This new potato has two big marketing qualities, even if its real reason-for-being is because it resists bruising, thus saving big bucks in discarded potatoes. The first is that it uses only potato DNA. There’s no cross-species, Frankentato thing here. The second is that it cuts cancer risk. It’s this particular point that will be a big seller while influencing the entire GMO debate.

Potatoes, and other starchy foods such as wheat contain natural chemicals that when heated form acrylamides, a suspected cancer causing compound. These are formed during high heat, as is used when potatoes are fried. Acrylamides are most present in the darkest cooking, say the extra-golden-approaching-brown French fry or in a blackened bread crust. Surprisingly, coffee is a source of acrylamides, formed during its roasting. Simplot’s potato contains less of the particular sugar that when heated, forms acrylamides.

Simplot is not shy about revealing its strategy for pushing the new tubers. And the question becomes how successful will it be? Will McDonald’s or won’t McDonald’s?

The public will have a say in that.

The debate over GMOs is so often lost in generalities or by separating out one small part of a wide subject — politicians call it “defining the issue.” Often these generalities have proven untrue. We need GMOs to feed a growing population, cries the pro side. And they continue to declare it even if studies are finding that yields aren’t really that much better, if at all, for GMO crops. The same holds true for claims that GMO crops require less pesticide. In fact, they often result in the use of more.

How do individual GMO crops affect our health? There’s often no way of knowing.

So pardon us for being suspicious. We’ll probably always be suspicious until independent studies thoroughly explore the potential harm of these plants. (And let’s not forget the threat they make to non-GMO crops and organic farming.) The pluses of one particular genetically engineered crop, minuses unknown, doesn’t mean that all GMO crops are vindicated. The issue is too various for that.

Let us know what you think here, Facebook or our GMO Forum.