GMO papaya, both fresh and as juice, threatens Hawaiian organics. 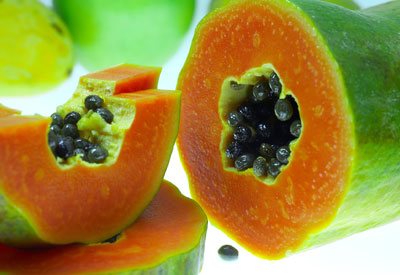 It wasn’t so many years ago that papayas were a novelty in our grocery market’s produce department. Markets now have papayas in abundance and priced to move. What’s the difference between now and then? Why it’s the GMO papaya.

Unless it’s labeled organic, the Hawaiian papaya you buy for your family is most likely from a genetically engineered tree.

Papayas are an excellent example of the good intention-bad result history of GMO development, really a smaller part of the GMO struggle when compared to the bad intention- bad result (think Monsanto) history of development. Papayas also offer a lesson in the issue’s complexity with all the various reasons that make GMOs, even those developed with the best intentions, a multi-faceted problem.

Most genetic engineering isn’t done for the benefit of consumers. It’s done for reasons that benefit growers and the manufacturers of GMO products (Monsanto sells it GMO soy bean seed and the Roundup herbicide that’s sprayed on it, the old Flavr-Savr tomato may have tasted awful but it didn’t bruise during shipping).

Arguing only one side of a many-sided issue allows GMO proponents to ignore broader environmental, economic, and human health aspects of the controversy.

Since 1998, the “Rainbow” papaya has been genetically engineered to resist a fungus that was killing trees in Hawaii and other papaya growing regions. The GE tree wasn’t developed by Monsanto or some other big agri-chemical conglomerate. It was made by Hawaiian-born plant pathologist Dennis Gonsalves. It reversed a trend that saw 80 percent of the trees on Gonsalves’ father’s farm dead, according to this article at Modern Farmer.

The return of the papaya has been held up as a success story by GMO supporters. A dying industry was saved. But another was threatened.

Studies have shown the GE papaya trees cross-pollinating with both organic and other non-GMO papaya. One Hawaiian State Senator claimed that Hawaiian organic papaya growers had thrown in the towel. Loss of overseas markets, like Japan, cut into sales and surpluses in the GMO market have caused fruit to go unpicked.

As more non-GMO trees are affected by the genetically modified papaya, the more the risks to human health increase.

Sure, there may be no evidence that genetically engineered papayas cause health problems. But wouldn’t it be wise to actually see if the two most likely threats — increase in allergens and antibiotic resistance — might be present? Wouldn’t that be prudent?

Rather than do everything we can to accommodate corporations and big agriculture, wouldn’t it be better to first prove that genetically modified papaya, and all other GMO crops, have no adverse health affects, won’t damage the genetics of other crops, and won’t increase environmental damage?

Hawaii has long been a battle ground in local control over GMO issues. Papayas have been excluded from some Hawaiian GMO bans and the issue there is highly charged. In the end, we’ll guess that consumers and economics — the returns on GMO papaya minus the loss in traditional and organic papaya sales — will determine the future of Hawaiian papayas. It might start when shoppers realize that 50 to 80% of all Hawaiian papaya are GMO and a lot of those papayas end up in juice. Time to start checking labels and asking questions.