Orange Disease: GMOS To the Rescue (Not)

Virus, pig DNA not the solution to "orange greening." 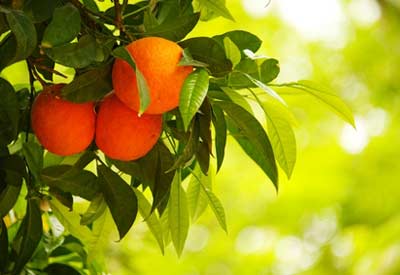 The plague that’s sweeping orange groves across the world — it’s known as “citrus greening” — was discovered in Florida in 2005. With millions of trees at stake and huge amounts of money, big growers responded as they often do: spray more pesticides. It was thought that killing the insect that spreads the bacterium coupled with burning all the diseased citrus trees might solve the problem. You already know the answer to that one.

The usual cross-breeding of orange trees with disease resistant varieties couldn’t work because no one could find an orange tree that was resistant to the disease. So they came up with what they thought was the next best thing. Find another living thing that was resistant, or even immune, and graft its genes into the orange. Voila!, a genetically-modified solution. Considered donors, so far for this modification? Other kinds of trees, a couple vegetables, a virus and … wait for it… pigs!

While GMO supporters have found reason to trumpet the idea that GMOs might save the oranges, not everyone is happy. Even orange growers have doubts. How do you convince the public to buy a product that’s been marketed as pure and natural for decades when its been genetically modified? In turn, it’s pointed out that consumers have been buying food products with GMOs — think Fritos — for years. But, of course, oranges are different. Their long-standing reputation as a wonderful nature-given source of nutrition makes them iconic. Would consumers think the same of a juice made from oranges that contain a piece of pig genetics? And what about the world market?

Many GMO foes have crossed over thinking that the orange juice situation is an example where genetic modification can do good. It kind of reminds us of how supporters of nuclear power started telling us that it was “clean” power especially compared to coal. You don’t hear that so much since the disaster at Fukushima, a disaster that just won’t go away. So when Mother Jones, the reliably pro-environment magazine, published an article saying that oranges might just be the one case where genetic modification can do some good, we were taken aback.

Then we read the entire article. And there’s a bunch of hedging in it. The most important point comes from a Washington State University research professor. “There’s no reason to believe that a gene that’s turned on all the time in the plant is going to last any longer than a typical chemical [pesticide] solution in terms of the evolution of resistance,” he said. Bacterial pathogens often develop resistance to pesticides in three to five years, he added.

And the takeaway is promising. “Systemic, multi-pronged approaches to fighting a tough pathogen like Candidatus Liberibacter are the most stable and resilient, the professor says; something similar to Integrated Pest Management. But the articles writer suggests that genetic modification might be part of that multi-pronged approach. I just don’t think he gets it.

But the controversy does bring up an interesting point for discussion: Are GMOS bad in every case? Or will there be certain cases in which genetic modification will be safe and/or necessary? If you ask your friendly, cautious Planet Natural Blogger, better safe than sorry, even if there are millions of dollars in corporate profits at stake.

In other GMO news: the testing results of Monsanto’s new GMO animal feed are not promising. In fact, they’re downright disgusting. Coupled with extreme confinement conditions the animals are suffering. Worse: “the symptoms veterinarians and researchers have observed in animals are not unlike many of the chronic, and increasingly prevalent, health problems plaguing humans today. Digestive disorders. Damaged organs. Infertility. Weak immune systems. Chronic depression.” Okay, I’m definitely taking the side that GMOs are harmful and dangerous in every case… until it can be proven, even in just one case and beyond a shadow of a doubt, that they’re not. Until then, we’ve got plenty of examples that point the other way. No exceptions.