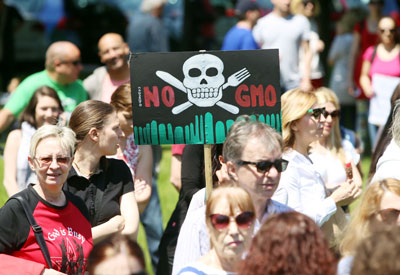 Did they think they could kill off the GMO food labeling efforts by beating it back in California? To the anti-GMO labeling forces, what’s happening must be like one of those horror films in which the monster is chopped to pieces and all the pieces rise up as a new monster. Several states are well on their way or have already introduced legislation to require GMO labeling. The latest is New Mexico. The bill, introduced by Senator Peter Wirth of Santa Fe, would require all foods that contain GMO ingredients be labeled as such as well as requiring all GMO produced livestock feed be labeled.

New Mexico isn’t alone. On January 3 of this year, supporter of a Washington State labeling Initiative submitted the 350,000 signatures necessary to get I-522 “The People’s Right To Know Genetically Engineered Food Act” on the next ballot. At least some 20 states have seen legislation introduced recently or host movements to require GMO labeling. See a list of them, with contact websites, here (link no longer available). In addition, Just Label It! continues to push the issue on the national level.

While we were encouraged to see some vendors at our local Farmers Market here in Santa Fe hosting petitions in support of the proposed labeling legislation, we can’t help but be pessimistic. During the last legislative session in New Mexico, a bill that would have protected farmers from lawsuits when genetically modified crops mingle with traditional crops via cross pollination died a quiet death after making it to the House floor. On the national level, a policy rider was attached to the 2013 Agricultural Appropriations Bill that will loosen the oversight of genetically engineered foods.

Most telling is what happened in Connecticut last spring and is happening in Vermont now. After threats of lawsuits from Monsanto that would be directed at the state, Connecticut dropped the labeling section of its Genetically Engineered Foods Bill. The same pressure is now being applied in Vermont and will, no doubt, be applied in New Mexico and Washington. Big (and we do mean big) money narrowly defeated the California initiative. The corporations involved in GMO production hope that fear will defeat any state seeking legislation requiring GMO labeling. Are we going to allow that?