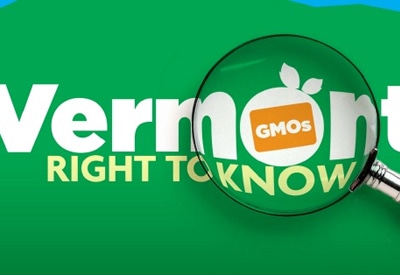 The Vermont House of Representatives on Wednesday of last week passed a bill requiring the labeling of foods with genetically modified ingredients. The bill, passed earlier by the Senate, will now go to the governor’s desk. Vermont Governor Peter Shumlin has indicated he will sign it.

The bill passed the House on a vote of 114 – 30. The usual corporate bullying techniques were used to no avail.

The vote capped a 20 year effort in Vermont to pass various types of legislation designed to protect consumers and organic farmers from GMO products. Unlike Maine and Connecticut, which earlier passed bills to label GMO products contingent on being joined by labeling in other states, the Vermont bill is stand alone, putting the requirement in effect regardless of the action of other states.

The Maine and Connecticut contingencies were added to help defray the cost of expected lawsuits. The Vermont bill sets asides $1.5 million for defending against lawsuits, plus provisions that make individual contributions and funds from other state lawsuit victories available for the GMO defense.

The fight against GMOs in Vermont has a long history going back to the introduction of the first GMO crops. Some of the resistance is due to the fact that Vermont has large organic and independent farming concerns. Another reason is a well-informed citizenry.

The anti-GMO movement has been active in the state since the 1990s. Some 37 Vermont towns have passed resolutions since 2003 asking for the labeling of genetically modified foods. In 2004, the state passed a bill designed to protect organic farmers that required all GMO seed be labeled as such (according to USA Today, that law has never been enforced). In 2006, then Governor Jim Douglas vetoed a bill that would have made genetically modified seed manufacturers liable for any cross-breeding or other contamination damage caused by GMO seed.

It’s thought that the Vermont citizenry’s long exposure to the GMO issue helped build the pressure that convinced many state legislators to vote for the bill. You can follow the steps of the bill’s success at the Vermont Right To Know website.

Despite the highly visible losses of GMO-labeling initiatives in California and Washington State which involved millions of dollars being spent against the measures by food processors and the GMO seed industry, the labeling movement seems to be flourishing. Some 29 states have had bills introduced last year that would require some form of GMO labeling. On the other hand, federal legislation, crafted and supported by the the Grocery Manufacturers Association and other corporate interests, has been introduced that would prohibit states from enacting their own labeling laws.

There are several lessons for the labeling movement in the Vermont victory. The state’s long involvement with the issue is a demonstration of the patience required in enacting change. What makes for this change is eduction on all facets of the GMO issue, not just its health consequences but its detriments to traditional and organic farming, and then keeping them in the public eye. Another facet was the inclusion of ways to pay for the lawsuits against such bills that will certainly be filed by corporations and manufacturers’ associations with deep pockets and armies of attorneys.

Taking into account the fierce independence of Vermonters, the pro-labeling forces asked that interests from outside the state not run ads supporting the measure. This was done despite large amounts of corporate and association money being spent in attempts to influence state lawmakers to vote against the bill.

We can all take a cue from the way the issue was addressed in Vermont. Arguments that GMOs are safe and that labeling would be an expensive proposition and increase costs for consumers (see “lawsuits” above) were quickly and reasonably countered. The notion of consumer choice was kept in the public eye. Falsehoods of the sort that were spread by pro-GMO forces in California and Washington were not allowed to stand. And the economic interests of small, organic farmers whose livelihoods are threatened by the spread of GMO crops was always part of the larger discussion.

Read the comments section on the Burlington (VT) Free Press story to see how the dismissive and uninformed arguments of cranks against the legislation can be dealt with intelligently and politely, The “Resources Page” on the Vermont Right To Know site is a fine example of how to make a  well-organized, convincing case for GMO labeling. And take a moment to savor what the people of Vermont have done. Their victory is our victory.