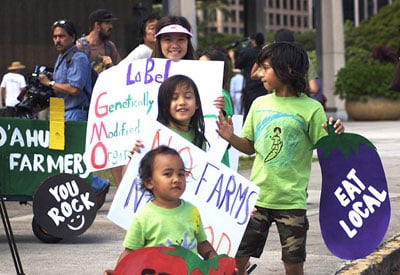 Mark Bittman, The New York Times columnist recently wrote a blog post supporting California’s GMO labeling Prop 37. Nothing surprising there (you can read his column here). Of more interest is the response it brought from Gary Hirshberg of Stonyfield Organic; you know, the yogurt people. Of course Hirshberg supports the measure. But he makes three outstanding points about the initiative and its (corporate) detractors.

First is that what Prop 37 proposes is already law in 50 other countries around the world. Again, no surprise there; we’ve heard all the European Union countries, as well as Russia and China (!) require GMO labeling or ban GMOs outright. His third point is also one we’re all aware of, a point especially important to organic gardeners and those who wish to keep their families safe: the use of GMOs has led to an explosion in the commercial application of pesticides. If you know someone who belittles your position against GMOs (“they won’t hurt you!”) be sure they understand this consequence of planting them.

It’s his second point that seems most appropriate in response to all the money agri-business is throwing against the measure. In short:

“I cannot think of a more deficient, dangerous and counterproductive branding strategy than to spend hundreds of thousands of dollars to tell consumers that they should not have the right to know what I am feeding them.”

This we-know-better position is an especially counter-productive marketing strategy as any savvy MBA will tell you. No justification for this approach will make us trust them… but it might make us trust them less. You can read Hirshberg’s entire letter here.

Meanwhile, there’s this from the Monday, September 17th edition of The Sacramento Bee: