Walmart, Coke To Give Up GMO Labeling Fight? 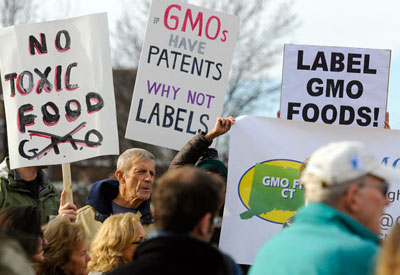 There are reports of a meeting between the FDA and several major food-supply corporations — Walmart, General Mills, Coca-Cola, and Pepsi-Frito Lay among them — at which the big businesses declared they would give up their fight against the GMO labeling movement. The meeting was first reported by Ronnie Cummins at AlterNet and has since been confirmed by Tom Laskawy at Grist who also confirms that a Walmart vice-president “did announce that the company would no longer take a lead in opposing GMO labeling efforts. Other food company executives agreed, saying that the fight had become too expensive, especially given the prospect of more state-level initiatives.”

Even if true, the news should be taken with a grain of salt. New labeling initiatives have sprung up since the defeat of California’s Proposition 37 and it may be, as Cummins and Laskawy suggest, that the corporations don’t think that money thrown against labeling is well spent. After all, it’s Monsanto and the other agri-engineering companies that benefit. GMO crops present no benefits to the consumer and only save farmers on labor (their cost may actually be higher as they use more pesticide). Businesses like WalMart don’t want angry consumers to react against the company’s support of the anti-labeling forces when it results in a publicity debacle, not to mention less sales, for them.

You may remember when Walmart embraced organic, small farm and locally -grown produce, a major publicity coup for the Arkansas-based corporation. But it didn’t take long for activists to point out that “locally grown” meant anything grown in the same state (think California) and those family farms weren’t always that small. It was also shown that these were cost-saving efforts on the part of the big box retailer. The less distance they had to ship produce, the more they saved. Mother Jones had a good take down of the whole Walmart organic publicity campaign and what it really meant for organic and local producers.

Meanwhile, the Organic Consumers Association is calling a boycott of some of the brands that contributed to the $46 million used to defeat the California Initiative. Some of the names on their list are surprising. But then, they’re owned by giant food corporations. Who are they? Odwalla and Honest Tea (owned by Coca-Cola), Naked Juice (owned by PepsiCo), Kashi, Morningstar Farms, Garden Burger (owned by Kelloggs); Muir Glen, Cascadian Farms (owned by General Mills) … the list goes on. Now, maybe some of them have decided that resisting GMO labeling really isn’t in their best interest.

Your wary and concerned Planet Natural Blogger encourages you to read the articles linked above and to follow this issue closely. It’s difficult these days to provide your family with the safest, most nutritious food possible — and isn’t that the bottom line of this issue? — especially considering the tangled web of agricultural production in this country. The best thing we can do, in addition to staying informed and urging our food producers to use safe practices? Reduce risk by growing as much of our own food — organically — as we have time and ability to do so. Then enjoy it.