Lies and distortions in the fight against labels for genetically modified foods. 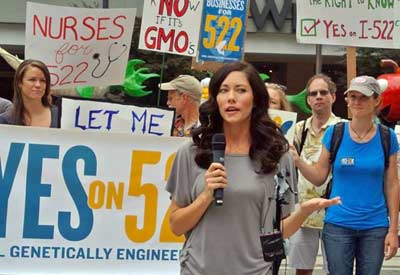 We’ve all read the news about how the pro-labeling forces in the Washington State GMO labeling initiative are being outspent in a huge way by the few corporations fighting to protect their obscene profits. Now, with just a month to go ahead of the vote, we’re getting a clear look at the anti-labeling’s tactics: lies, smears, and distortions.

This comes as no surprise. We saw what happened in California. The pro-labeling forces were outspent five-to-one and then narrowly lost the vote. Many of the television, print and radio ads urging voters to defeat the initiative used statistics and predictions arrived at by their own agencies, featured “experts” with strong ties to the corporations that promote GMOs, and, well, out-and-out falsehoods. Guess what? The moneyed interests fighting Washington State’s Initiative 522 are recycling some of the same ads, the same smears, that were used in California. Even their logo is almost an exact copy of the one used in California.

Most upsetting are the false tactics that have carried over to the “no” campaign. One centers on exemptions, with the No forces claiming that 522 requires labeling of pet food but not meat meant for human consumption. Of course, this isn’t true. Any genetically altered creature, and so far that only means salmon (there are no genetically altered cows, pigs or chickens at this point), would be labeled. But that doesn’t stop them from saying it.

Exemptions made up a huge and, sadly, effective part of the California campaign. On the face of it, they seem a bit disingenuous. Are the “no” forces saying the law isn’t strong enough, that it should include the labeling of alcoholic beverages? Silly. But exemptions are a major part of the No campaign. After the vote analysis showed that nearly 30% of those who voted against labeling in California actually support it. They just thought that the exemptions, after being misrepresented by the No lobby, went too far or not far enough. But do we really want restaurants — you know that pizza, delivered to your door as well as that high-class meal you took mom out for on her birthday, to fall under this proposed law? Wouldn’t the No forces just claim that the labeling initiative had gone too far? They can’t have it both ways.

But they will try. The No forces are now touting a “study” that says that if the measure passes it will add over $500 a year to a household’s grocery bill. The study was published by BIOtech Now, an industry support group whose mission statement says they “offer original content that emphasizes the business needs of the industry.” It was conducted by the questionable Washington Research Council, a pro-business (and business supported) “activist organization” that fights against government regulation. Do you think their study might have been loaded?

Let’s help the folks fighting for common sense labeling of GMO foods in Washington State. You can sign a petition in support, no matter where you’re from, here. It’s time to stop the smears against those trying to do the right thing.