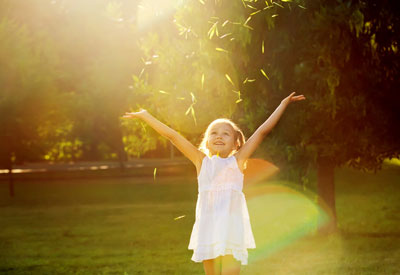 From the looks of the “regulated letters of inquiry” page over at the United States Department of Agriculture’s “Animal and Plant Inspection Services,” the list of genetically modified plants looking to enter our environment and food supplies includes potatoes, pineapples, and sorghum (a sweetener with multiple uses). Then there’s the one we don’t consume: lawn grass. In certain ways, it might be the most frightening.

Why? Because it’s completely unregulated. It needs no prior approval from the USDA before it can be unleashed in America’s front yards. And it’s not alone. Among the other GE plants escaping oversight are a corn that promises less methane from the cows who eat it and an ornamental plant that glows in the dark. Yes, really (scroll down to “How We Make the Glowing Plant”).

Glowing plants and yard grass might seem innocent enough since we don’t eat them. But, as every organic farmer knows, cross-contamination of organic crops means they are no longer organic. And cross-contamination is a real threat. This list of cross-contamination cases (link no longer available), though it begins in 2006 and goes back from there, references how easy it is to happen, even when so-called tightest controls are in effect. The number of incidents since 2006 continues to grow, including most infamously, the Oregon GMO wheat contamination of 2013.

Mirroring the Oregon case, GMO wheat surprisingly turned up at a former Monsanto test site in Montana in 2014, even though the altered wheat had not been planted there since 2003.

All these engineered plants escaped to contaminate other crops, even though their growing was confined and regulated. Not so with Scott’s Miracle-Gro GMO bluegrass. Because of loopholes, it doesn’t need to be tested before its released to the public.

Scott’s has tried this before, in 2003. That time its GMO grass escaped into the wild, effectively dooming its commercial introduction. Despite that set back, Scott’s has continued to push for GMO lawn grass.

There’s also an attempt to protect sales and profit margins. Sales of grass seed have been down in recently years. In 2013, sales again decreased if only by 1%. The pro-business website The Motley Fool takes the economic concerts into consideration but also weighs in on the dangers and other consequences.

But the big issue here is that these products will go untested and unregulated. Grass isn’t the only crop to escape through the regulatory loopholes. Other included GMO crops that will show up in the food supply, including an herbicide-resistant canola. History has shown that all these mutations will escape and breed with other crops, something that threatens organic farming, genetic diversity, and the very dependence of our food supply.

The recent focus on labeling foods with genetically altered ingredients remains important. But we must also acknowledge the entire spectrum of evils — there, I said it — that accompany the commercial growing of GMOs. We think a full accounting of GMOs effects on the environment and plant diversity must be addressed. Discussion open at the Planet Natural GMO Forum or here in the comments and on Facebook. Go at it.