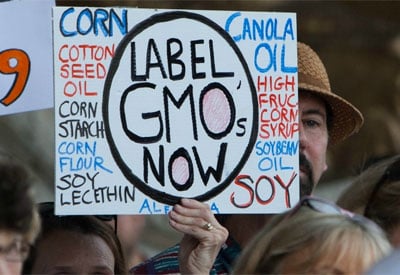 The House of Representatives is set to vote as early as today (Thursday, July 23) on Kansas Republican Congressman Mike Pompeo’s House Resolution 1599 titled “The Safe and Accurate Food Labeling Act of 2015.” Opponents who have labeled the bill as the “Denying Americans The-Right-To-Know” or DARK Act say the legislation is an attempt to preempt state, county and city laws regulating the labeling and growing of genetically modified crops.

The bill, like its official title, is an exercise in Orwellian doublespeak and an example of cloaking its true motives in language that disguises its actual intent.

A summary of the resolution can be found here, the entire text is here. The Center For Food Safety has summarized the bill’s important points. It will:

The move, announced by the United States Department of Agriculture, has been linked by pro GMO-labeling groups to H.R. 1599 and Representative Pompero’s efforts. Indeed, the USDA push to include GMOs in its voluntary certification program, first acknowledged last spring, seems to complement such efforts.

Sadly, Resolution 1599, like so much other legislation introduced in Congress, seeks to hide its intent, not only with its given title, but by couching it in language that seems to embrace exactly the opposite of what it seeks to do. We encourage you to read the entire text of the resolution. Pay special attention to the list of co-sponsors at the top. There’s a lot of them, maybe a few from the state where you live.

When a similar bill was introduced last year, GMO activists took to the streets in December to stop it. Pompero reintroduced the bill this past March.

We’ve suggested that the growing demand for non-GMO food products might give producers a clue to where the future lies. Many second-tier food producers as well as some major food manufacturers, have found increased sales by eliminating GMOs from their products and mounting advertising campaigns to announce it. But the corporations that profit from sales of GMO seed and their associated products (think pesticides)–as well as their minions in Congress– don’t think so. We’ll keep an eye on the vote when it comes.