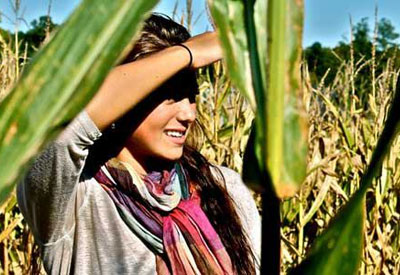 Via the Nation of Change website, we learn that Monsanto has contributed $4.2 million dollars to defeat California’s GMO labeling initiative. Makes sense. Monsanto holds the patents on a number of GMO crops, many designed to be resistant to Monsanto’s widely-used herbicide Roundup. It’s a slick way to double sales; you can use all the Roundup you want without hurting your crop if your crop is grown from Monsanto genetically-modified seed. Except… Superweeds!

And speaking of Roundup… here’s a report on a study (link no longer available) that found the active ingredient of the product — glyphosate — could cause birth defects. Do we really need genetically modified corn that’s resistant to a product that might damage fetuses in the womb?

This article isn’t necessarily anti-GMO but it does list anti-initiative contributions from a number of agribusiness and chemical companies. And it makes a reasonable point: spending all that money to defeat the labeling initiative might make the public think the pro-GMO side has something to hide. Do they?

Want to know what a “balanced” story on the GMO initiative looks like? Click here. Balance in this case means focusing on the probability that consuming genetically-modified foods might be harmful to one’s health while ignoring the patent issue, the environmental dangers they present and the threat they pose to small organic farmers. Be sure to scroll down for the rap video that addresses the issue and the ones ignored in the text (“there’s a lot we don’t know about the food we grow”… def!).

And while we’re talking about balance… here’s a report from Earth Open Source that lists “Myths and Truths” about GMOs. It raises a good point: “there is no need to take risks with GM crops when effective, readily available, and sustainable solutions to the problems that GM technology is claimed to address already exist. Conventional plant breeding, in some cases helped by safe modern technologies like gene mapping and marker assisted selection, continues to outperform GM in producing high-yield, drought-tolerant, and pest-and disease-resistant crops that can meet our present and future food needs.” Will somebody say “amen?”

One Response to “GMO Crops, Roundup And Big Money”