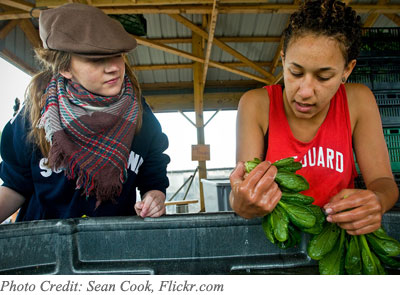 The recent loss of GMO labeling efforts in Oregon (barely) and Colorado (not so close) have been a set back for pro-labeling forces, a set-back that raises question of how concerned consumer groups can ever win against massive amounts of money and a flood of advertising.

The cover story of the Seattle Times PacificNW Sunday magazine this past week, “Seeding A Movement: Little San Juan County takes a stand against the GMO giants” (link no longer available) written by Brian J. Cantwell, reminds us that there have been small but significant victories in the fight to halt the takeover of our food supplies by the corporate behemoths that patent genetically modified crops and related products.

The success in 2013 of a small, grass-roots effort to ban the growing of genetically modified crops on this group of island in the Salish Sea south of Vancouver, B.C and north of Seattle carries lessons for groups across the country trying to protect organic crops and farmers from being overwhelmed by corporate-controlled, industrial agriculture that relies on few crops and a small number of large seed producers.

The San Juan Islands already had a thriving number of small farms offering sustainable and organically grown fruits, vegetables, and livestock. GMOs endanger organic farms as various incidences of crop contamination — GMO plants moving into organic fields and/ or contaminating seed — cancel any chance that crops grown organically can be listed as such.

Finding them on the Islands would destroy the area’s organic, sustainable growers

As reported in Crosscut magazine in 2012, initiative supporter Ken Akopiantz of Horse Drawn Farm on Lopez Island heard Canadian farmer Percy Schmeiser address the battles he’d had with Monsanto — Schmeiser was the focus of the 2009 documentary David vs. Monsanto — after he found Roundup resistant, GMO canola seed growing on his farm.

Akopiantz who raises organic vegetables, lamb, pork, eggs and beef on his island farm, was concerned that seed, especially GMO grass seed, could contaminate his pastures. It wasn’t hard to attract other island farmers to the cause as well as those island-dwellers in support of locally raised, organic foods. From this came GMO-Free San Juans.


The issues addressed during the campaign were different than with labeling initiatives. The San Juan County initiative had nothing to do with labeling; it’s a complete ban against growing any genetically modified crops in the county. The emphasis was on the organic farms and what would be lost if GMOs were present and spread, by wind, animal or other natural carry, to a crop intended for organic certification. It was also about pesticide use. And it was about the growing control that a few giant corporations have over seed availability. It was about preserving a way of life.

There were questions about whether the ban was required at all in a county isolated from the mainland and already heavily invested in small, sustainable growing. But of course, that’s exactly what they were trying to protect. In that sense, the ban is about protecting a local economy, sure the organic farming scene but also its tourism and even real estate sector. It’s the area’s farming and rural attractions that bring tourists on the ferries to see Lopez Island and the others. Cut out its farming community and everything suffers.

Your astute Planet Natural Blogger has long suggested that any initiative or legislation aimed at stopping the tyranny of the GMO industry, be it labeling or growing bans, must argue the entire issue. Human health is central, of course, and the GMO industry continues to assert that its products (even its pesticides) are safe, though evidence is starting to build against that assumption. But we must also consider the damage that the monoculture of GMO crop-growing does to the environment and the land as well as the threat it brings to seed diversity. And we can’t forget the economic consequences that genetically modified crops and corporate agriculture bring to farm country. Protecting the organic farmer is central to that notion.

Let us know how you think the GMO-free movement should proceed and how we can win legislation or initiatives that help keep our small farms, as well as our children, safe, either in the comments here, on our Facebook page or over at the Planet Natural GMO Forum. How do we best convince others to join the cause?