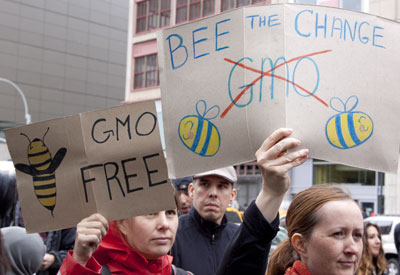 We’re often drawn into discussions with intelligent people about the value of genetically engineered crops and the foods that contain them.

These friends, professors among them, often embrace the accepted wisdom tossed about by commercial media outlets — that nature has been genetically modifying plants, often with help from humans, for centuries and that genetically modified crops are providing better yields and higher nutrition in both developed and developing countries. To think that they might be a hazard is to be anti-science.

These narrowly focused arguments are at best misleading and at worst out-and-out lies. Plants do cross-breed in nature, taking beneficial traits from others of their specific kind. But, there’s no natural cross-breeding of the sort that occurs in genetic engineering, in which genetic material from completely different species, including bacteria, are inserted by force.

And, as results from the field are showing, genetically altered “golden rice” and the like aren’t increasing yields in the third world, and contain only slightly more amounts of vitamin A and others. But they are enslaving local populations to buying seed from the international agri-chemical industry and all the accompanying herbicides, manufactured by the same industries, that they require.

Keeping the GMO focus on positive, narrowly focused issues, is the work of a few high-priced public relations outfits. Not surprisingly, a recent report found they’re using many of the same tactics that cigarette manufactures’ used back in the 1960s to convince the public that their products were safe.

Of course, they were not.

“Seedy Business,” (PDF), a report released earlier this year by U.S. Right To Know, a non-profit organization that counters food industry disinformation, is an eye-opener. It’s introduction opens with this:

“Since 2012, the agrichemical and food industries have mounted a complex, multifaceted public relations, advertising, lobbying and political campaign in the United States, costing more than $100 million, to defend genetically engineered food and crops and the pesticides that accompany them.”

The report lists 15 things that “big food is hiding with its slick PR campaign on GMOs.” Maybe the most controversial of these: “GMO science is for sale.” Others can be used to counter your well-meaning friends who’ve heard the media say that the FDA has determined these foods are safe:

The FDA does not test whether GMOs are safe. It merely reviews information submitted by the agrichemical companies.

It’s no secret that the public relations effort on behalf of GMOs border on sleazy. A Mother Jones report that alleged (see page 2) that a private security firm run by former Secret Service officers spied on a trio of organizations concerned about GMOs in 2000 after it was discovered that Taco Bell had sold products that contained genetically modified corn not approved for human consumption. Reading the emails that suggest break-ins and stealing trash from dumpsters.

The entire “Seedy Business” report is worth a read, especially if you’re not feeling outraged enough over how the campaigns against GMO labeling have been won. It’s also worth reading for the details, so that when someone claims — as is often done in public relation piece op-eds — that science has proven GMOs safe, you can say not so fast.

UPDATE: As reported in the Friday, March 20 online edition of The New York Times, The Food and Drug Administration said on Friday that genetically engineered non-browning apples and bruise-resistant potatoes were safe for human consumption. The Department of Agriculture had recently approved the crops for planting.

The FDA’s review is mandatory and involved (see above) only a cursory review of previous studies supplied by the companies that do the genetic engineering. Something’s wrong when the very companies that profit from the sale of patented GMO crops supply the information that decides their safety. In fact, it’s outrageous.