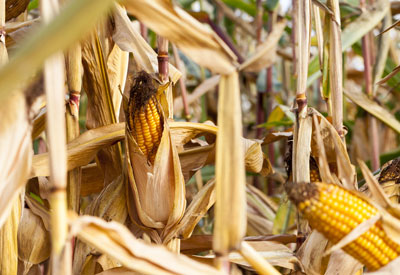 Drought has been big news this summer, no more so than regarding its effect on America’s corn crop. If there’s a silver lining, it’s that it has put renewed emphasis on corn raised for energy production (ethanol) and the amount that goes into making high-fructose corn syrup with all its connections to obesity. The down side? What about genetically engineered corn that resists drought?

This article in The Washington Post and a related blog post on its “Wonk Blog” tells us something we might have guessed: Monsanto has developed a so-called drought-tolerant corn. We’re reminded of the dictum that’s been bandied about the last several years: Never let a good crisis go to waste. Monsanto, apparently, has taken that to heart. It goes without saying that the claim to drought resistance is something of a stretch.

Is there a silver lining to these articles? Scroll down through the Wonk Blog and find some doubters (enter the Union of Concerned Scientists – PDF). Further down are some solutions that don’t involve genetic engineering; namely organic practices. The read-between-the-lines lesson here is that industrial agricultural uses a lot of water and is hard on soil. Returning to a few simple historic practices, like returning previous crops to the soil and using compost. They cite a recent Nature paper that found soils managed with organic techniques tend to hold more water and perform better in dry conditions than conventional farming. (Sometimes home gardeners are way ahead of big agriculture.) And then there’s this: “I sometimes worry we put too much emphasis on the genetics,” Larry Wagner, an agronomist at South Dakota State University, told the Post. So do we, Larry, so do we.