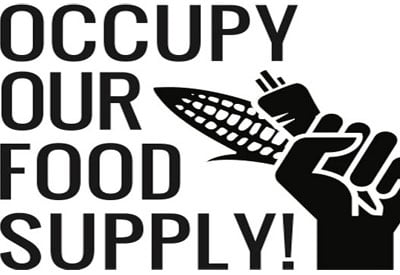 The Supreme Court on Tuesday heard arguments in the case of Monsanto, manufacturer of genetically engineered — or GMO — soybeans, and 75-year-old Indiana farmer Vernon Bowman who over a period of years bought seed stored at his local grain elevator for a risky, second season planting of beans. Some of the beans that area farmers had deposited at the elevator were Monsanto’s RoundUp Ready seeds for which Monsanto holds the patent.

Monsanto discovered that the seed Bowden was buying contained some seed harvested from RoundUp Ready crops and sued in 2007, winning a judgment of $84,456 from a small farmer who works some 300 acres.

The corporation’s patent policy prevents farmers from saving or reusing their seed for planting. Monsanto claims that they have rights no matter how far down the line their seed is planted. The irony here is that Bowman bought Monsanto seed legally and used it according to the corporation’s dictates for his first crop. More background on the story is here.

Most of the coverage of Bowman’s struggle with the corporate giant focuses on the legal, patent issue without addressing the larger issues of GMO safety when consumed by humans, the danger to the genetic pool of non-GMO seeds, the harm from extreme pesticide use in conjunction with pesticide resistant crops, the threat that genetically engineered seeds bring to organic farmers, and all the other negative effects resulting from the use of corporate-owned seed stock. Here’s an exception.

Earlier this month, the Center For Food Safety issued a new report Seed Giants vs. U.S. Farmers (follow the link on the CRRS page to read the full report). Some of the more harrowing findings:

The report also highlights the assault on seed diversity that results from the use of GMO crops: “86% of corn, 88% of cotton, and 93% of soybeans farmed in the U.S. are now genetically-engineered (GE). “The loss of seed diversity is only one of the many threats that GE seed makes to the practice of organic farming and gardening. We don’t like to use images of war but there’s a struggle going on for control of our food and Bowden’s Supreme Court appeal is just one battle, a fight he seems unlikely to win. It will take many Davids to triumph over the corporate Goliaths. We should all be asking ourselves: is it in our best interest to allow patents on living organisms (the Supreme Court will also hear a case regarding the patenting of human genes later this session)? We’re already seeing the frightening implications.