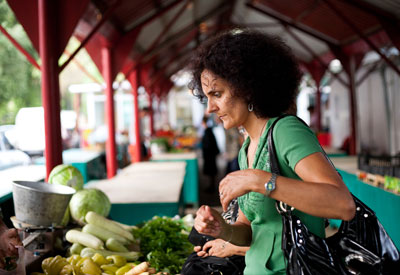 Farm-To-Table Controversy: An ongoing discussion erupted into a full-scale controversy over the weekend when Dan Barber, co-owner of New York City’s ground-breaking, local-sourced Blue Hill Restaurant, published an opinion piece in The New York Times that seemed to accuse supporters of the farm-to-table movement of being naive. How dare he?

Turns out that Barber was just taking a deeper look at something that we’ve come to accept as absolutely good: small farmers bringing their crops directly to consumers. He uses his own experience — Barber is also on the board of directors and runs the restaurant at the Stone Barns Center for Food and Agriculture in New York’s Hudson River Valley — to discover just what we’re leaving out of our conception of the farm-to-table revolution. But first — and this is the part that surprised many people — he starts out with a contradiction.

He opens by noting how successful the farm-to-table movement seems to be by acknowledging the crowds that take to farmers’ markets to buy locally- grown produce. He states that “almost 80 percent of Americans say sustainability is a priority when purchasing food.” He suggests that this kind of enthusiasm for locally grown foods from small producers can “reshape landscapes and drive lasting change.”

Then comes the kicker:

Except it hasn’t. More than a decade into the movement, the promise has fallen short. For all its successes, farm-to-table has not, in any fundamental way, reworked the economic and political forces that dictate how our food is grown and raised. Big Food is getting bigger, not smaller. In the last five years, we’ve lost nearly 100,000 farms (mostly midsize ones). Today, 1.1 percent of farms in the United States account for nearly 45 percent of farm revenues. Despite being farm-to-table’s favorite targets, corn and soy account for more than 50 percent of our harvested acres for the first time ever. Between 2006 and 2011, over a million acres of native prairie were plowed up in the so-called Western Corn Belt to make way for these two crops, the most rapid loss of grasslands since we started using tractors to bust sod on the Great Plains in the 1920s.

His experience sourcing heirloom emmer wheat (or farro” to use in the bread he serves in his restaurants opened his eyes. The thing that makes the bread so good? His local farmer explained: “The secret to great-tasting wheat, Klaas told me, is that it’s not about the wheat. It’s about the soil.” And that soil demands care, here in the form of rotating the farro with cover crops. Where’s the profit, the economic sustainability, when the land’s not growing wheat?

This is where, I think, Barber makes his most important point. Those cover crops, used to improve the soil allowing the farmer to avoid using chemical fertilizers, can also be food sources. Millet, barley, Austrian winter peas, and kidney beans help replenish the soil. Mustard not only replenishes but also repels pests when it’s plowed back into the soil. But all Barber wanted was the wheat. He realizes that if he truly wants to see a change away from corporate, monoculture agriculture, he has to support all of what his small, local, and organic farmer does and not just “cherrypick” what he wants from it.

To that end he creates a new dish at his restaurant, “rotation risotto,” that utilizes the grains and peas farmer Klaas grows (and mustard greens to thicken), what Barber calls “an edible version of Klass’ farming strategy.” There you have it. If we’re going to stem the tide against corporate agriculture and its non-sustainable and unhealthy farming practices, it’s not enough to change the way we shop. We’ll have to change the way we eat as well. More beans, peas, and other legumes. More rotation crops. We have to become part of the farmers strategy. We encourage you to follow the link above and read the entire article.

The debate about the effectiveness of farm-to-table, sustainable farming practices is nothing new. Orion magazine had a great piece on the dilution of farmers markets — even one of our favorite small towns, Bozeman, Montana, has two — and how important not only the growing but the distribution and infrastructure of locally-sourced food is. We encourage you to go read the whole thing. And we encourage you to comment, here or on our Facebook page, because — as grandpa used to say — more heads are better than none. The many facets of locally-sourced, organically grown food, requires it.

More On Oregon Counties’ GMO Ban: After our blog post on the struggle against GMOs in Oregon, we received the following email from the fine folks at GMO Free Josephine County, one of the two Oregon counties that recently passed GMO growing bans. Josephine County faces a potential legal battle as a result of the State of Oregon’s passage of a “Monsanto Protection Act” last year, an act that preempts such action by counties and municipalities. But timing is everything:

Thank you, Eric… the article looks great.
A little known fact is that we filed our ballot measure with our county clerk, and it was accepted by our district attorney on Setember 30, 2013… SB863 was signed in early October. We, of course, were still pre-empted, but we think it is valuable to know the timing. Our attorneys are preparing for whatever legal challenges lie ahead to make sure the voice or our citizens is acknowledged and enforced locally 🙂 We will not give up until our ordinance is recognized by the state and enacted by our county officials. In the mean time we are hoping that the Biotech companies that have stated publicly that they will not offer contracts to farmers in jurisdictions where GMO bans have been passed will leave our county alone as well… we think their potential profitability in our county is so small compared to what their potential LIABILITY (with public outcries, etc.) would be it they continued soliciting land owners here.

We’re encouraged and inspired by the grass-roots action the people of Josephine County have taken in the face of some of the world’s largest chemical and bio-technology firms. Let’s wish them the best…and follow their example.