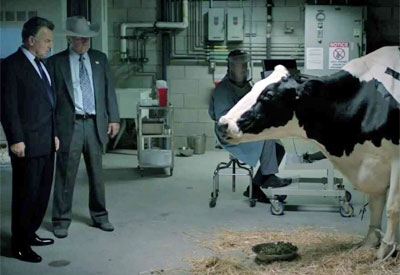 Learning about gardening one cabbage at a time:  Let’s start with some good news. Bonnie Plants, one of the nation’s largest suppliers of plant starts, has announced the winners of its 3rd Grade Cabbage Program. A winner, randomly chosen from each state, will receive a $1,000 savings bond to be applied to the student’s future education.

While only one winner gets the savings bond, there are no losers in this program. Bonnie supplies millions of cabbage starts around the country to classrooms that choose to participate. Included with the starts are lesson plans that help teachers teach the fundamentals of plant growth. That the students learn their lessons well can be seen in the pictures of the cabbages they’ve grown.

In these times of shrinking school budgets, teachers need all the help they can get to supply their students with the materials for relevant and informative lessons. Here’s hoping that one teacher who sees this will get involved in the program, and that a host of that teacher’s students will be inspired by the project to pursue a lifetime of gardening.

Chain Restaurant takes on factory food: Chipotle, the nation-wide restaurant chain known for its burritos and other Americanized Mexican fair has created a stir in the world of marketing. Rather than invest its money in advertising of the big-splash sort, say during the Superbowl, its made the freshness and wholesomeness of its food an issue by taking on factory produced food, particularly inhumanely raised meat and the use of antibiotics. Now they’re premiering a new television series that pokes fun at American agriculture.

Chipotle was behind a couple of videos that went viral on You Tube. “Back To the Start” is an animated short on the reality behind food advertising that depicts picturesque farms and traditional farmers to promote food products manufactured in smoke-belching factories. Yes, that’s Willie Nelson singing Coldplay’s “The Scientist” behind the somber scenes and turn-around outcome.

The other video is “The Scarecrow” that suggest the notion we have of where are food comes from is a product of “pure imagination” (yes, the beautiful song from Willy Wonka and the Chocolate Factory). There’s also an app for a game that can be downloaded at iTunes. Chipotle has also released an informative, serious video on the misuse of antibiotics in raising meat.

The new series, debuting on Hulu on February 17th, is a comedy-drama series — not animated — that depicts what happens when one corporate food producer decides that it can save money on cattle feed by feeding its animals petroleum pellets. The outcome — can you say exploding cows? — is hilarious. But the message behind the series, one that suggests what lengths corporate agriculture will go to for achieving profits at the consumers and the livestock’s expense is serious. You can see the trailer for the series here.

“Farmed and Dangerous” is also the tag line of British Columbia’s Coastal Alliance of Aquaculture Reform, an organization committed to “protect wild salmon, coastal ecosystems, coastal communities and human health from destructive fish farming practices. “We’re going to guess they didn’t copyright the “farmed and dangerous” tag. No matter. Their cause is an important one and more information on the group can be found here.

Connecting Drought and Global Warming: The record drought in California has focused attention on climate change and its role in causing this devastating climatic effect. President Obama, in an address as he delivered aid to California agriculture, suggested that other parts of the country may see the same effects as climate change progresses. He might be right. But, then again, it depends on what part of the country you’re talking about.

Scientists aren’t in complete agreement about the role of climate change in the California drought. The relationship that it does have may not be primary. The issue with the drought serves to show how the effects of climate change — aka “global warming” — aren’t simple. They can’t be seen in yes or no, black and white, hot or not terms, and to argue that a single climactic event, be it a drought, a record-high temperature, a single super storm, or extreme cold temperatures and record snowfall during a single winter, proves or disproves the reality of climate change is a simplification that’s patently wrong.

Take the California drought. Richard Seager, a climate scientist who studies water issues at the Lamont-Doherty Earth Observatory of Columbia University, is quoted in a recent New York Times story to say that the current drought in California is probably caused by “natural variability.” Yet this drought, which resembles the one suffered in 1976 and 1977, has been more intense — the worst in 113 years — because of the warmer temperatures experienced this time around. Any moisture there might be is evaporating more quickly. And those warmer temperatures are due to global climate change.

It’s well known by now that climate change models predict that global warming will cause wet areas to become wetter — heat squeezes moisture from the air — and that dry areas will become drier. The lesson from the California drought is that a seasonal variability, namely a low-pressure system off the coast that’s forcing ocean moisture to the north, can still be at play.

To try to apply absolute values to something as complicated as climate change and weather conditions in an attempt to say it exits, or doesn’t (as so often happens in news accounts) is misleading. There are lots of factors at play. Anyway, go read the entire article. It’s fascinating stuff. And while it may or may not make an argument for or against the existence of climate change, it’s certainly instructive on how to look at the issue.