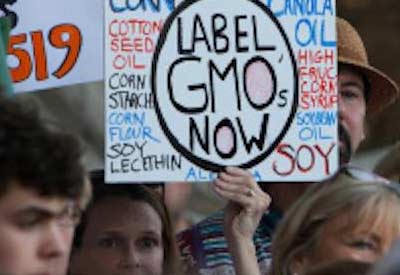 On Monday, Connecticut became the first state to pass a GMO labeling bill. But before breaking out in cheers, listen to this: the bill comes with a few, at least temporarily knotty strings attached.

Due to heavy lobbying, several conditions were attached to the bill. One would require at least four other states to join Connecticut in passing GMO labeling laws. Those states must have a total population of 20 million. And one of them must border Connecticut.

Many labeling supporters see the conditions as a way to permanently cripple the bill. Others have saluted the bill as progress. One report called the compromises a “condition of virtual impotence. ” This report also identified the largest and most active opponents to the measure, a group that includes lobbying organizations supporting the Connecticut biotech industry, giant grocery retailers and — you guessed it — Monsanto.

The conditions are designed to give Connecticut cover to prevent being sued individually by Monsanto and others (as was threatened in Vermont in 2011) and to avoid retaliation and harm to the state’s grocery retailers. Rather than submit to the labeling requirements, large suppliers of products containing GMOs, it’s argued, could just stop shipping them to the state (population 3.5 million).

Because of its large population, the labeling of GMO-containing products in California could have influenced the entire country to label genetically modified products. Suppliers would have been reluctant to lose such a large market. In the face of heavy lobbying, voters defeated the California initiative in November. Some 25 states are now considering GMO labeling through law or initiatives. Connecticut may have the numbers it needs sooner than opponents think.

Neighboring Vermont may be ready to join Connecticut with a labeling law. If passed, labeling in Vermont could take effect as soon as 2015. (Vermont has a population of 650,000… what about you, New York?) Monsanto has previously threatened to sue Vermont in past considerations of the bill. With other states joining in, such a suit would not only be less costly for the state but would also increase its chances of winning. Stay tuned.

In other GMO news, news satirist Stephen Colbert addressed the issue of the genetically modified “zombie” wheat that turned up in an Oregon farmer’s field in a recent show. Calling Monsanto “another defenseless multinational,” Colbert suggested the corporation destroyed all tested material and “buried that wheat in the middle of a field” because of potential lawsuits. The theory isn’t so far fetched. A Kansas farmer has sued Monsanto over the appearance of the wheat, claiming that the company’s negligence has driven down the price, hurting American farmers. For its part, Monsanto has suggested that GMO activists were behind the appearance of the GMO mystery wheat. You can see Colbert’s segment in video here.