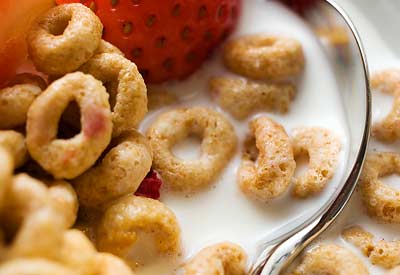 The battle to label foods containing GMOs has seen some obvious setbacks in the last year. When the ballot initiative in Washington State went down this fall, many pundits could only see the defeat. What the results also reveal is a groundswell of support for labeling GMOs, evidenced by the narrow margins of defeat after the GMO industry (food manufactures, corporate agriculture, and genetically modified seed producers) outspent pro-labeling forces by millions and millions of dollars.

Food producers might be beginning to realize the marketing potential of declaring their products GMO free. General Mills has announced that they will make their best selling cereal Cheerios without GMOs.

If you’re like me, your first reaction is one of cynicism. We all know Cheerios are made from oats and currently there’s no such thing as genetically-modified oats. But that doesn’t mean that the sweetener — corn syrup — isn’t made from GMO corn.

But I think we can see this as a good sign. General Mills has felt the pressure, put their ear to the ground, and lifted their finger into the wind. The margin of victory for the no-labeling forces in both California was only 2 % and that was achieved by huge sums spent on advertising most of which was not about labeling per say but about technicalities. Or out-and-out falsehoods. They know that nine out of ten Americans favor GMO labeling and almost 6 out of ten say that would not buy foods that were labeled to show the product contained GMOs. Even General Mills doesn’t need a weatherman to know which way the wind blows. Why not put the breeze at their backs?

Of course, this is a very small step. Some might see this as a reason for keeping government from requiring GMO labels — market pressures will take care of things. But we can’t see all companies, especially those with products made mostly of GMO soy or corn, jumping on the bandwagon, let alone the down-line manufactures of the seed and related supplies — yes, we mean Monsanto et al. Maybe a requirement would help give us consumers who want to remove GMOs (and for good reason) from our diet a choice?

But companies deciding that it’s in their best interest to advertise the absence of GMOs in their products? That’s cool. And consider the fact that it may make them less likely to donate big bucks to organizations dedicated to stopping GMO labeling — yes, General Mills has been in bed with the Grocery Manufacturers Association. Already, some of the big agro-chemical companies are quaking, as well as the financial institutions that support them.

Let’s hope this is the beginning of a trend. But let’s not forget efforts underway to allow foods containing GMOs to be labeled “natural,” and the like. A small victory is no reason to give up the struggle.